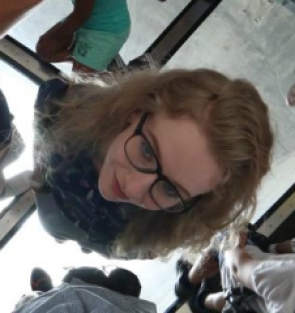 I’m a full time PhD student in the English department. I completed my undergraduate degree in Theatre Management at Utrecht School of the Arts in The Netherlands in 2013, immediately followed by a Master’s in Theatre Studies at the Royal Central School of Speech and Drama, for which I moved to London. After completing my thesis entitled City of Control: A Handbook for Disrupting Places and graduating in 2014, I worked in the theatre industry for a few years, most recently as administrator with a children’s drama school. I have also volunteered on a wide variety of theatre projects, and I write for a number of cultural blogs and magazines.

For my current research project, I’m exploring how terrorism features in early modern drama and how contemporary theatre makers use early modern drama to investigate terrorism today. Despite the term ‘terrorism’ first appearing during the Reign of Terror in late eighteenth century France, violent events of a similar nature occurred in the early modern period and were reflected in literature and plays of the time. These violent events could either feature directly – the Saint Bartholomew’s Day Massacre in Christopher Marlowe’s The Massacre at Paris – or be implied – the Gunpowder Plot in William Shakespeare’s Macbeth. Thus, while the term ‘terrorism’ itself didn’t feature yet, there existed a notion of terrorism that enabled people to think about it as a concept.

Terrorism studies have until recently focused mainly on the 20th and 21st century, and scholarship on the phenomenon becomes progressively rarer the further one travels back in time. Although there is extensive literature on violence in early modern drama, this is mostly centred on related subjects such as rebellion, martyrdom and torture rather than terrorism itself. In this research project, I intend to explore the connection between the two and hope to show that contemporary productions that set Shakespeare and his colleagues in the context of terrorism are not anachronistic: what we call terrorism now is a visible tactic in their plays, even if the definition of terrorism is something that’s ambiguous and subject to change over time.

Although my current research project focuses on terrorism in early modern drama specifically, I have a wider interest in conflict and resistance, the role of performance in public and political discourse, and in early modern and contemporary staging practices.