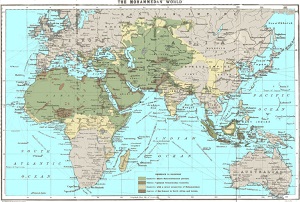 Credit: Samuel Zwemer, The Moslem World (out of copyright image)

From the mid-nineteenth century, men working in the highest levels of the British state, animated by the partition of the world among the imperial powers and fuelled by the idea of Britain as the ‘greatest Mohammedan power’, began to sketch out a vision for states under British tutelage in which Islam played a central role. This talk will trace the trajectories of these putative Islamic states in Africa, the Middle East and Asia, the role played by Muslim leaders in them, and explain how this British imperial manipulation of Islam ultimately failed.

‘This talk will explain how Britain’s imperial attempts to manipulate Islam in the nineteenth century ultimately failed.’ John Slight is a Lecturer in Modern History at The Open University. His research interests are the history of British imperialism's interactions with Islam and the British empire in the Middle East from c.1850-1960. He is the author of prize-winning book The British Empire and the Hajj 1865-1956 (Harvard University Press, 2015).