Leah Clark's book Collecting Art in the Italian Renaissance Court: Objects and Exchanges is now published in the UK, with the North American publication soon to follow. 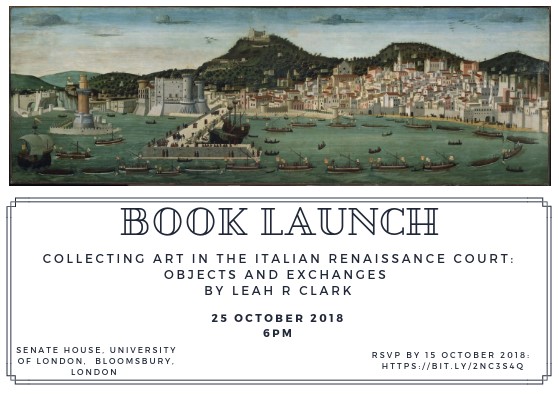 In this book, Leah R. Clark examines collecting practices across the Italian Renaissance courts, exploring the circulation, exchange, collection, and displayof objects. Rather than focusing on patronage strategies or the political power of individual collectors, she uses the objects themselves to elucidate the dynamic relationships formed through their exchange. Her study brings forward the mechanisms that structured relations within the court, and most importantly, also with individuals, representations, and spaces outside the court. The book examines the courts of Italy through the wide variety of objects – statues, paintings, jewellery, furniture, and heraldry that were valued for their subject matter, material forms, histories, and social functions. As Clark shows, the late fifteenth-century Italian court can be located not only in the body of the prince but also in the objects that constituted symbolic practices, initiated political dialogues, caused rifts, created memories, and formed associations.