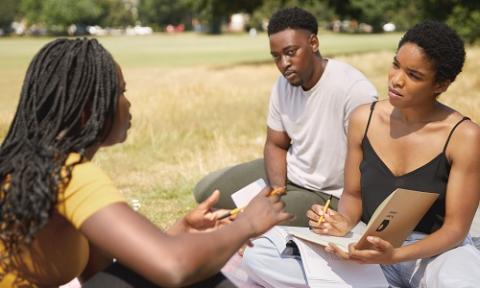 The Faculty of Arts and Social Sciences (FASS) student awards scheme recognises outstanding and inspirational students from within the Black, Asian and Minority Ethnic student community who have either gained outstandingly high marks in their modules, or who have made exceptional steps towards achieving their study goals. The Faculty is fortunate to have the support of inspirational alumni and the families of outstanding academics for these Awards.

Congratulations go to the following recipients of the Awards presented in November 2022.

Edman received The Joan Armatrading Award for Outstanding Performance on a 21J module. Joan Armatrading noted that she was “incredibly impressed” by Edman’s performance. Edman was “honoured to receive the Award” and said that the flexibility of studying with the OU enabled her to become aware of her abilities after having had to drop out of campus university study.

Eesha was recipient of The Sir Lenny Henry Award for Outstanding Achievement on a 2021-22 module. In his message, Sir Lenny Henry said he’d been incredibly moved by Eesha’s story and her determination to succeed. On receiving the Award, Eesha was “blown away”. She had struggled with her studies, but with the support of her tutor had been able to continue, and more opportunities had opened up to her.

Rashi received The Professor Marcia Worrell Award for Outstanding Performance on a 22B module. On behalf of his sister, Ian Worrell noted that he was “enormously proud” of Rashi for the tremendous start to her degree. Rashi was extremely thankful for the Award and Ian’s kind words, and would continue to work to the best of her ability.

Rebecca was recipient of The Professor Stuart Hall Award for Outstanding Performance on a 2021J Level 1 module. Presenting the Award on behalf of her husband, Catherine Hall congratulated Rebecca on an exceptional start to her studies. Rebecca said that she was “incredibly proud and grateful to receive this award and for the support I’ve received from my tutor and staff at the OU throughout the module. I really hope that this recognition can inspire others who feel for whatever reason, like their capabilities and worth are determined by the values or limitations others place upon them. It isn’t, we are all capable and we are enough no matter who we are or how we identify.”