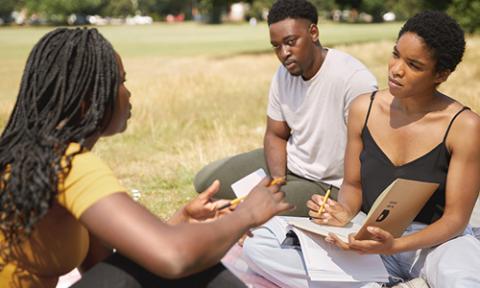 The FASS Student Awards seek to maximise student success, and recognise students from a Black, Asian, or Minority Ethnic background who have made exceptional progress during their study, in order to achieve their study goals. Led by the FASS Student EDI Team, we are fortunate to have the support of Joan Armatrading and Sir Lenny Henry for two new student awards, which were presented in November 2021.

The inaugural The Joan Armatrading Award for Outstanding Performance and The Sir Lenny Henry Award for Outstanding Achievement give recognition to those students from under-represented groups, who have either gained outstandingly high marks in their modules, or who have made exceptional steps towards achieving their study goals. Each award recipient is enrolled on a Roll of Honour, and receives an engraved trophy, certificate, and monetary prize.

Congratulations to Humaira, recipient of the The Joan Armatrading Award for Outstanding Performance in a 2020J FASS Module. Joan Armatrading said "I and the Faculty are immensely proud" of Humaira's consistency and achievement, adding "there's always lots of things to distract you from studying, so well done for not getting sidetracked."

Congratulations to Temitope Obaweya, recipient of The Sir Lenny Henry Award for Outstanding Achievement in a 2020J FASS Module, overcoming considerable obstacles during her studies. Sir Lenny Henry was "thrilled to announce" Temitope as the recipient, saying that he and the panel were "incredibly moved by Temitope's story, particularly her determination to prioritise her studies, despite experiencing some extreme difficulties."

Temitope said "This is extra special because it has happened in spite of extraordinary circumstances I find myself in. A big thank you to the sponsor, Sir Lenny Henry, who I truly think is funny as a comedian and has also revealed to me through this that he has a big heart... I thank all the tutors who put up with my irritating presence at all tutorials as I found that was one good way to retain some focus. So thank you to you all."