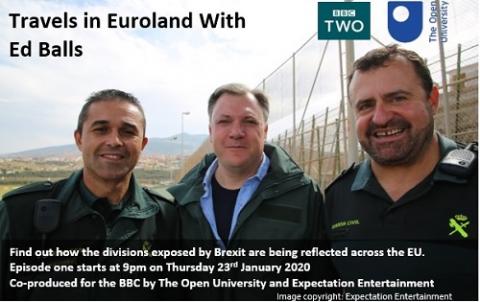 Starting on Thursday 23rd January a new 3-part weekly OU/BBC series ‘Travels in Euroland with Ed Balls’ will be shown on BBC2 at 9pm.

Following on from the success of Travels In Trumpland, this warm and entertaining series sees Ed Balls head out to Europe to discover how the divisions exposed by Brexit are reflected across the EU. He meets voters to find out what the future of Europe holds for its citizens.

Episode 1 – Our Way Of Life

Ed Balls heads to Spain and Holland to explore national identity and the rise of right-wing populism across Europe. In Melilla, Spain, he works a shift with the local police.

Episode 2 – The People Vs The Elite

Ed Balls heads to Poland and Germany, exploring the anti-elite sentiment which has swept Europe and given rise to right-wing populism. In Poland, he works a shift in a coal mine.

Ed Balls heads to Italy and France to explore how years of austerity have affected politics across Europe. In Italy, he meets with fashion entrepreneur, Valeria Marini.

The series was commissioned by Broadcast and Partnerships and was produced with the support of FASS.

The OU Nominated Academics are Professor Jo Phoenix and Alan Shipman and the Media Fellow is Dr Alison Penn.

There are extensive content in connection with the series subject areas on OpenLearn including The Open University’s exclusive interview with Ed Balls. (Please note - this site may not be live or complete prior to broadcast)