‘The OU is the best thing I ever did’ says Helen 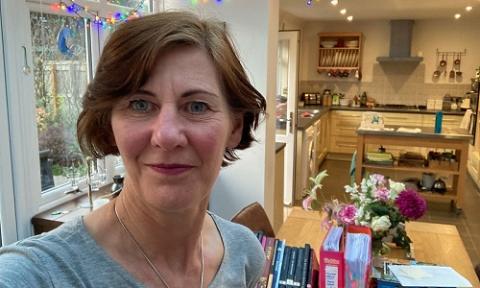 In the summer of 2016, Helen Ball’s life changed overnight after the sudden loss of her husband of 31 years. Three months later, feeling lost and looking for a bolthole, she started a Classical Studies degree at The Open University.

For Helen, 57, what began as a distraction during the most turbulent time in her life became a sanctuary where she could escape over the next six years.

“In June 2016, my husband of 31 years passed away from a heart attack. It was totally unexpected and came out of the blue. Rich was 53, and I was 51. We had moved in together when I was 18 and he was 20, and we were married two years later. He was my whole world and my best friend.”

Having started and paused her studies with The Open University years earlier, Helen now had renewed motivation for completing her degree.

“I had started an OU degree 20 years earlier, but the combination of young kids and Rich's business meant it wasn't the right time, so I never continued. This time I had a powerful motivation: the fear of losing my mind to grief.”

Re-kindling a love of history

When experiencing loss, we often reach for the familiar and anything that has the potential to bring comfort. For Helen, this was her lifelong interest in history and the classics, which she had shared with her husband.

“I just love the Ancient Greeks. I love the myths, the history, the archaeology – everything! Rich was mad about Greek philosophers, and I love archaeology. I have been so lucky to have visited Olympia, Delphi, Knossos, Rome, Pompeii, Macedonia plain, and King Philip's Palace.”

Leaning on her studies, Helen rebuilt her confidence and buried her mind in tales of ancient heroes and monsters while navigating this new and uncertain stage in her life. With graduation in sight for Helen, after studying part-time for six years, it is a bittersweet ending.

“The OU is just the best thing I ever did – the confidence it's given me is amazing. It is the best thing I've ever done for myself. I have no other qualifications, and I didn't do well at school due to personal issues, but I knew I could do it. This degree has proved so much to me.

“I'm now ready to continue my life and face whatever it brings, but I'll be forever grateful for having the OU to distract me. I cannot thank the OU enough.”