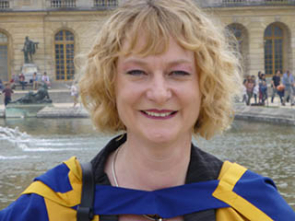 My main research interest is public engagement with the classics, including viewer (or audience) reception of the classics in popular film and television, and creative engagement with classical myth.  Modern texts I have worked on include Xena: Warrior Princess, Charmed, Torchwood, Doctor Who, HBO Rome and Starz Spartacus.  I am also interested in classics and feminism, and receptions of classical myth and literature focussing on female characters.  Recently I have been working on on sacrificial heroines in Game of Thrones and Buffy the Vampire Slayer and classical monsters on television (articles forthcoming).  I am also a contributor to the Roehampton arm of the ‘Our Mythical Childhood’ research project.  I am currently working on a volume for EUP on epic in film and television, which I am co-editing with Hunter Gardner from USC, and a special edition of New Voices in Classical Reception Studies on popular twenty-first century classics including selected papers from the Celtic Conference in Classics in St Andrews in 2018.

2018 ‘The Changing Faces of Heroism in Atlantis (2013-15)’ in Epic Heroes on Screen edited by Antony Augoustakis and Stacie Raucci, Edinburgh University Press, pp. 125-140.

2016, with Hunter H. Gardner ‘Violence and Voyeurism in the Arena’ in Starz Spartacus: Reimagining an Icon on Screen edited by Antony Augoustakis and Monica S. Cyrino, Edinburgh University Press, pp. 211-228.

2010 ‘Unpacking Pandora’s Box: The redemption of an ancient anti-heroine for a twenty-first century audience in US TV Series Xena: Warrior Princess and Charmed’ in Classical and Contemporary Mythic Identities: Construction of the Literary Imagination, edited by Aminal Ayal and Paul Hardwick, Lampeter: Edwin Mellen, pp. 97–122.

2010 ‘Who needs a Homeric hero when we’ve got Xena?: The confusion of gendered roles in Xena: Warrior Princess episodes “Beware Greeks Bearing Gifts” and “Ulysses”’, Rosetta 8.5, 96-126.

2009 ‘Hell Hath No Fury Like a Dissatisfied Viewer: Audience Responses to the Presentation of the Furies in Xena: Warrior Princess and Charmed’ in Classics for All: Reworking Antiquity in Mass Culture, edited by Dunstan Lowe and Kim Shahabudin, Newcastle: Cambridge Scholars, pp.  217-236.

I participated in the first 2012-2013 Communicating Ancient Greece and Rome programme, administered by the Archive of Performances of Greek and Roman Drama at the University of Oxford, aimed at encouraging scholars to get more involved in public engagement activity.  Following on from this programme I delivered a public lecture at the Royal Theatre Northampton and am continuing to deliver public lectures and introduce films, for example at the Petrie Museum, UCL and the LSE Library,  obtaining viewer feedback at these events to build into my research.  I am also teaching a course on Greek myth on television with the Brilliant Club. I held a Greek Mythology Tour of Brighton, kindly sponsored by the Classical Association, as part of  Brighton Fringe Festival 2018, and obtained excellent feedback. I am planning to hold this again in 2019. More information on my 2018 tour is available at https://classicalreception.org/?s=greek+mythology+tour+of+brighton