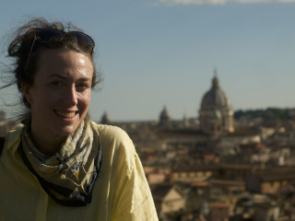 Dr. Carla Benzan specialises in the art and visual culture of Catholic Reformation Italy. Her projects span religious and scientific contexts as well as historical and contemporary periods. As a trained artist, Carla is interested in thinking across periodisation, while never losing sight of the particularity and richness of early modern image cultures.

Before joining the OU Carla taught at the University College London, the University of Essex, and at McGill University. Her research has been supported by numerous grants and awards including the Mellon Foundation and the Warburg Institute.

Carla’s research is concerned with the increased authority granted to lifelike images in sacred and scientific contexts during the Catholic Reformation. Working at the juncture of art, science, and religion, she focuses on the so-called ‘realism’ or ‘naturalism’ of northern Italy. Her interdisciplinary research examines the active role played by lifelike images in pilgrimage, procession, private devotion, encyclopedic collections, garden culture, missionary travel, and natural history. Deeply concerned with the history of vision and the senses, Carla’s approach is guided by a concern with the ways that the visual perception of representational images came to be conjoined with more embodied forms of experience in the early modern period.

Carla has published and presented widely on the Sacro Monte di Varallo, a unique pilgrimage site located at the base of the Italian Alps northwest of Milan. Early modern pilgrims to the ‘Holy Mountain’ at Varallo navigated a complex itinerary of architectural chapels incorporating architectural replicas and strikingly realistic multi-media narrative scenes. Carla is currently completing a book manuscript entitled “The Converted Image: Early Modern Pilgrimage and the Sacro Monte di Varallo.” The study examines the use of startlingly life-like sculpture as the focus of religious conversion, challenging the notion that the early modern period passively witnessed the end of pilgrimage by examining its dramatic reform after the Council of Trent.

In her new research project, Carla examines an unprecedented series of 156 feather collages created by a Milanese gardener in 1618. The Libro di Piume (or “Feather Book”) represents local birds and human characters of Lombardy through the intricate application of feathers, preserved beaks and talons, animal skin, and leaves on the page. The article based on this research assesses the ethical and political stakes of the gardener’s intermedial translation of Italian printed sources (early ornithological treatises and popular print) through the appropriation of artisanal taxidermy techniques and the indigenous technology of feather mosaic from New Spain.

Carla’s third project “Suspending Belief: visual images and the art of falling (1570/1970)” argues that images of falling bodies became a means of re-negotiating the relationship between vision and knowledge during the Catholic Reformation. The study undertakes new archival research into the commissioning, installation, and reception of three fresco paintings of heretical bodies suspended in mid-air and resituates their importance in relation to debates about bodily descent in art theory, sceptical literature, and pre-Newtonian physics. Analysis of early modern images and texts will be informed by considerations of falling in philosophy and performance art circa 1970, enriching the conceptual and historical contributions of the study.

Students who are interested in the history of sacred or scientific image cultures of the early modern period are invited to contact Carla directly by email.

Co-organiser with Joanne Anderson (University of Aberdeen), “Image and Ascent: Mountain Terrains in the History of Art” Conference hosted by the Warburg Institute in the School for Advanced Studies, University of London. 14–17 September, 2020.