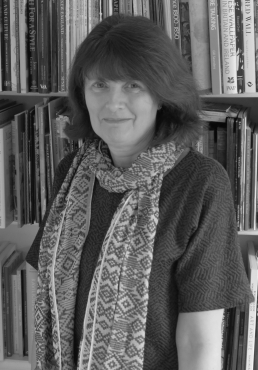 Dr Clare Taylor's research focuses on the historic interior and its decoration and the relationship between consumers, designers, makers and objects. She joined the Open University in 2011, having previously taught Arts modules for the University as an Associate Lecturer, and Contextual & Critical Studies as a Visiting Lecturer at Middlesex & Bucks Universities. Clare has also worked as a Curator of Fine and Decorative Art in museums, art galleries and for English Heritage across England, Scotland and Wales.

Clare's book The Design, Production & Reception of Eighteenth-century wallpaper in Britain www.routledge.com/9781472456151 (Routledge) was shortlisted by The Historians of British Art Book Prize in 2019. This monograph aligned the growth of wallpaper with developing cultures of luxury, sociability and global trade through study of sites, archives and museum collections across the UK. It argued that wallpaper was a key new material of the long eighteenth-century which made a significant contribution to design, including Chinoserie and a taste for imitation in 'mock India' (English wallpapers imitating Chinese) and 'mock flock' wallpapers. It also showed how the nascent wallpaper industry successfully competed with other trades and spawned new materials for use in decorating the interior, such as papier mâché.

Clare's next book project uncovers the role of gilt leather hangings and related objects in the creation of interiors from c.1600 to c.1800. She is conducting the first full investigation of the people, places and objects associated with Gilt Leather Rooms across the British Isles, researching not just archival and museum sources, but extant schemes in buildings from castles to the country house, inns to college rooms. She has been awarded a Mid-Career Fellowship from the Paul Mellon Centre for British Art to support her research in connection with this project. The project aims to throw new light on the global nature and usage of gilt leather and on the relationship between printed sources, architectural structures and wall decorations.

A third area of interest is the ways in which the historic interior has been re-interpreted in the twentieth and twenty-first centuries, in particular investigating the work of decorators, dealers and scholars in promulgating the idea of the 'Georgian' and the ways in which the long eighteenth-century has been viewed through tropes such as the country house style.

Clare welcomes enquiries from potential research students, and would be happy to supervise topics related to her specialisms, in particular on eighteenth-century material culture, issues of gender difference and on twentieth century design as well as in the field of the interior. Contact: clare.taylor@open.ac.uk

The Design, Production & Reception of Eighteenth-century wallpaper in Britain (The Histories of Material Culture and Collecting,1700-1950, Routledge, 2018) www.routledge.com/9781472456151

Clare has contributed to the running of Art History's Undergraduate and Postgraduate modules, including chairing the popular second level Art History module A226, Exploring Art & Visual Culture. Her teaching contributions to part 2 of the MA in Art History (A844) are on approaches to the study interiors, and on collecting and practice in the work of the twentieth century British pattern designer Enid Marx. She has also written a chapter on Chinoiserie in eighteenth-century Britain for the well received Level 3 Art History module, A344, Art & its Global Histories.

She was the Convenor for Art History on the inter-disciplinary Arts & Humanities Level 1 module, A112 Cultures, which launched in October 2020. She edited, and authored on, the Art History block and on the module's inter-disciplinary teaching producing units on the Elizabethan country house, Grand Tour portraiture, Shakespearean imagery and on contemporary artists and place https://www.youtube.com/watch?v=4khO3RuGJ30.Clare is now Convening on A336 and a module author on A237.

She has a particular interest in innovation in teaching and is working with Dr Heather Richardson from Creative Writing on a Scholarship project examining how students in Art History and Creative Writing learn by interrogating art works. Creative Interactions: Teaching with the Open University's Art Collection centres on the University's own art collection and examines the creative and critical synergies between the two disciplines https://openuniv.sharepoint.com/:w:/s/units/lds/scholarship-exchange/EVmm0_2xO5ZMjP43Bnhal0ABhxqPq_VpDtuR18vMszTY0Q.

Clare frequently presents to the heritage sector on issues around the historic interior and its interpretation for example in ‘‘Resale, restore, reprint: Rediscovering historic wallpapers in early twentieth-century Britain’,  presented to the 'Working with Wallpapers', a conference organised by the Wallpaper HistorySociety and English Heritage http://www.wallpaperhistorysociety.org.uk/event/working-with-wallpapers-future-directions-in-wallpaper-research-and-interpretation/ http://recsoxford.org/network/recso-study-day-2015-at-home-exploring-eighteenth-century-domestic-space/ She has also shared her work on the global and the interplay between imported luxury goods and new products at events organised by the National Trust, such as ‘”A Large Assortment of Curious India Paper”: the Eighteenth-Century English Market for Chinese Wallpaper’ to the conference ‘Chinese wallpaper: Trade, techniques and taste' organised by the V&A and RCA with The National Trust https://chinesewallpaper2016.wordpress.com/.

She is a member of the Steering Committee of GOTH (Gender and Otherness in the Humanities), a Research Centre based in the the School of Arts & Humanities: https://fass.open.ac.uk/research/centres/goth. Clare is Co-Convening the 'Textiles' session at GOTH's inaugural Research Symposium involving speakers from academia and the heritage sectors.

Clare has worked in collaboration with a number of museums and heritage bodies on films as part of her contributions to OU teaching. These include Compton Verney in Warwickshire (on the Marx-Lambert collection) http://www.comptonverney.org.uk/collections/9/marx_lambert_collection.aspx and the Museum of the Home (on the period room) https://www.museumofthehome.org.uk/, both for A844, Part 2 of the MA in Art History; and with The National Trust at Hardwick Hall in Derbyshire (on the Elizabethan country house) for A112, Cultures.

She also advises local and national bodies on matters related to historic wallpaper's collection and research. These have included the National Maritime Museum and the National Archives.

Clare has also shared her research with wider audiences via OU/BBC co-productions. She contributed films to 'Travelling Objects' in connection with the OU/BBC series Civilisations:

She is also Academic Consultant on series one, two and three of the prime-time BBC/OU series, Secrets of the Museum: Behind the Scenes at the V&A and authored the majority of the object entries for the Open Learn interactive, 'Can you be a Curator?' https://www.open.edu/openlearn/tv-radio-events/tv/secrets-the-museum

Clare is a founder member of a global network made up of scholars, curators, wallpaper manufacturers, heritage professionals and conservators working on Chinese wallpaper. She is also part of the British Chinese Studies Network composed of scholars, writers and film-makers.