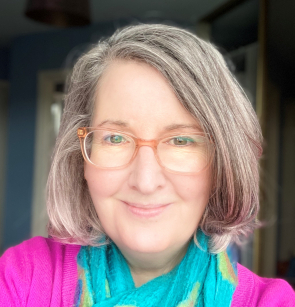 After completing my degree in English Literature at the University of Leicester my career took a fifteen-year detour away from the subject. During this period I had a range of jobs, including time as a bus driver, medical representative, healthcare marketer and company director. It wasn’t until I had children that I finally came to my senses and started doing what I really wanted to do: writing and teaching. I studied an MA in Creative Writing at Lancaster University and in 2014 I completed a PhD with the OU. At the moment I'm working on a creative nonfiction project called A dress for Kathleen which combines text and textiles. I am charting to progress of the project on Instagram @a_dress_for_kathleen

The Second Coming published in In the Red, May 2007

The Walled-In Room published in Fusing Horizons Issue 3, May 2004

2003 – The Acoustic Version – shortlisted for the Asham Award

In addition to teaching Creative Writing at undergraduate level I have delivered workshops and short courses in a number of community settings. I am particularly interested in site-specific teaching, using archive resources such as census returns and newspaper stories as prompts for stories and poems.

This is not a memoir: case study of a memoir-in-progress (2017)
Richardson, Heather
New Writing: The International Journal For the Practice and Theory of Creative Writing, 14(2) (pp. 160-166)

Freethinkers, a novel, and 'Inventing history: how do research, imagination and memory fuse creatively in the writing of an historical novel?' (2014)
Richardson, Heather Evelyn
PhD thesis The Open University