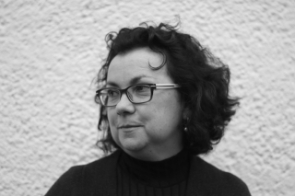 My collaborative work with artists includes work on the short story with Richard Kenton Webb at the Corinium Museum in Cirencester and with Iain Andrews at Warrington Art Gallery. My most recent collaboration is with Natalie Sirett at Burgh House Museum in Hampstead.

Before going into teaching, I worked in Public Relations before becoming Literary Manager of the Bush Theatre and then Literary Associate at the National Theatre in London during the 1990’s.  I was a freelance Readings Producer in BBC Radio Drama working on the flagship new writing series Opening Lines and producing several series of classical crime fiction for BBC Radio4extra.

My creative research is focused very much on site specific projects where I’ve worked with award winning artists to create a conversation between art and fiction and the dialogic process which takes place between them.  I'm currently collaborating with the artist Natalie Sirett http://www.sirett.com/ working with prose poetry on reimaginings of familiar fairy tales and contributed work to a collection of sonnets, 'Medusa and her Sisters' illustrated by Natalie which was exhibited at Burgh House Museum in Hampstead in October 2019. Previous collaborations have included: ‘My Mind’s Eye’, a short story based on Hans Christian Anderson's fairy tale 'The Wild Swans' exhibited alongside the work of Iain Andrews and published in ‘Mythopoeia’ at the Warrington Arts Festival in 2012 at Warrington Museum & Art Gallery; with  Richard Kenton Webb at the Corinium Museum in Cirencester in 2014 on ‘Still Life with Blackbirds‘, a crime story against the background of an archaeological dig and published by Artists’ Choice Editions in 2017.

My short fiction has been published widely in publications including The London Magazine and the UEA anthology Mafia and in 2014 I was shortlisted for the Cinnamon Short Story Prize, my short story ‘Mr H’s Angels’ based on the composer Handel’s connection with the Foundling Hospital in London, appearing in the anthology ‘Patria & Other Stories’.  In 2018 I was long listed for the Bare Fiction Magazine short story prize and my poetry is published by Beautiful Dragons press.  My first novel which is a crime novel set on the Northwest coast of England, ‘The Weight of Bones’ was shortlisted for the 2017 Cinnamon Debut Novel Award where it was described as ‘…a tangled and beautifully textured tale of murder, fires, deceit, blame and guilt’.

Other research interests focus on drama and, radio drama in particular as well as writing for theatre. I have a long standing connection with radio drama having started my writing career as radio dramatist with plays and adaptations produced on BBC Radio 4 and repeated now on BBC Radio 4extra.  I'm currently working on a new play for BBC Radio Drama. ​A short ‘found’ play ‘Tweet’ was performed by the theatre company Uncommon Nonsense at the Royal Court Theatre in 2014.

My creative practice is complemented with professional expertise having worked as a Producer at BBC Radio Drama in Readings for nine years and as Literary Manager at the Bush Theatre and at the National Theatre on 'Connections' where my focus was on working with and developing new writers.

I am currently Chair of the second year module A215 Creative Writing http://www.open.ac.uk/courses/modules/a215 and Deputy Chair of the third year Creative Writing module A363 Advanced Creative Writing http://www.open.ac.uk/courses/modules/a363.
I am interested in multi-disciplinary teaching and have written undergraduate material for the OU (including print, online and audio visual): 'Writing Stories' a unit in the first year multi-discipline module A111 Discovering the Arts and Humanities. I wrote an introductory unit for L101 Introducing English Language and am currently writing a short course on Travel Writing.

At postgraduate level I am supervising PhD's in fiction.
I am interested in hearing from: ekphrastic approaches in prose and the form of the short story; drama and scriptwriting. I am happy to hear from prospective students who are interested in creative writing and critical research in these areas.

I am acting as Academic Consultant on BBC series 'Write Around the World' featuring Richard E.Grant due to air in early 2021.

From 2018 to the present I've worked with the OU in Wales on leading workshops with FE colleges in South Wales a partnership between the OU in Wales, University of South Wales, Wales Millenium Centre Outreach Creative Writing Project and Coleg Gwent in Newport on writing developing and producing short films.