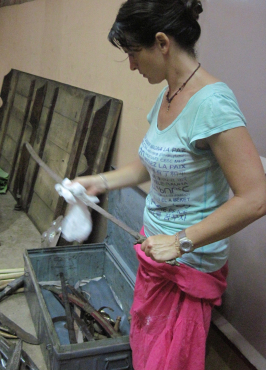 My PhD in the Religious Studies department focusses on the South Indian martial art kaḷarippayaṟṟ˘. My research is funded by the UK Arts and Humanities Research Council Open-Oxford-Cambridge Doctoral Training Partnership. In 2018, I completed with distinction the MA in South Asian Area Studies at SOAS, University of London.

As a dance artist, my work has investigated the confluence of my practices of martial arts, yoga and postmodern dance as maker, performer, facilitator and teacher, in the UK and internationally. Prefiguring my current research, it has always been strongly interdisciplinary, exploring themes including race and belonging (La Blanche / the white girl, Alliance Française de Bangalore, Bonjour India! festival 2010, and Chapter, Cardiff, 2011), embodied violence and boundaries (Fighting Like A Girl and What It Taught Me, supported by the Arts Council Wales and Theatrau Sir Gâr, 2019), the embodied experience of ecological degradation (H2O : avant le déluge, Pegasus Theatre, Oxford, 2012), kaḷarippayaṟṟ˘ and ritual (Rituals of Faith and Imagination, Y Ffwrnes Theatre 2013, Wales Millennium Centre 2014), and connection and differently abled bodies (On your island, does the night fall later?  Remix Dance Project, South Africa, 2001).  You can find a fuller summary of my choreographic work here.  My dance has been funded by the Arts Council of Wales and Wales Art International. My initial undergraduate degree was in English at King's College London, followed by a British Academy funded MA in Text and Performance Studies at King's College London and the Royal Academy of Dramatic Art (RADA), then a Professional Diploma in Dance Studies from what is now Trinity Laban, then the Laban Centre for Movement and Dance.

I have also trained and worked as a radio journalist, most notably producing an hour-long documentary for BBC English Regions on the relationship between dance and different religious and spiritual traditions in Britain (Sacred Dances, 2007) and as the producer for BBC Radio Berkshire's faith and ethics Sunday breakfast programme.

This interdisciplinary research encompasses ethnography, drawing on my relationship since 2002 with CVN Kalari in Thiruvananthapuram, South India, and the study of manuscripts in Malayalam and Sanskrit.  I interrogate kaḷarippayaṟṟ˘'s embodied and written practices as they currently exist in its martial, medical and ritual forms, and consider their place in the wider landscape of traditional Indian knowledges.

Since the late 1990s I have taught at arts organisations in the UK and abroad, and at many of the UK's major drama and dance schools and universities. These include Goldsmiths, King's College London, Swansea Metropolitan University, RADA, ALRA, Rose Bruford, the Central School of Ballet, New Africa Theatre School Cape Town, the University of Stellenbosch, Attakkalari in Bangalore, Jawahar Kala Kendra in Jaipur, Epic Arts Cambodia, and the National Youth Theatre of Great Britain. Areas of teaching have encompassed martial arts practice (aikido and kaḷarippayaṟṟ˘) into dance, contact improvisation, somatic alignment, release technique, yoga, pedagogy, choreography, Laban theory, movement into text, Shakespeare, devising, voice, and I worked extensively as a movement director on drama school productions. I have taught a community yoga class in Llanelli, South Wales since 2013 and have contributed to the history and philosophy strand of the triyoga (London) yoga teacher trainings since 2014.

You can see short films of me teaching in India and in Wales here.