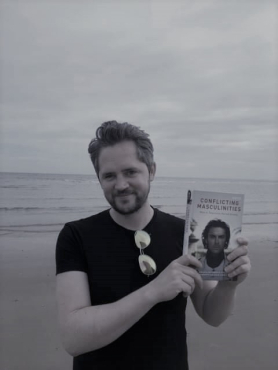 Dr Mark Fryers joined the Open University in Film and Media in December 2022.

Mark has also worked in several capacities as a freelance worker within the film and television industries.

Mark’s particular focus concerns depictions of the maritime sphere within media representations and its implications upon identity formation in its many forms. The history, counter-history, construction and dissemination of all aspects of marine culture is a central concern of his research, relating as it does to our most vital and endangered natural environment. This has built from specialisms and empirical research in British fictional film and television to embrace global screen cultures, documentary, independent filmmaking and, particularly, animation.

A current research interest building from this is the politicisation of landscape and mythology as they relate to the maritime sphere, particularly as they also relate to Britain’s historic and ongoing continental relationships.

Mark also has a concomitant research interest in the fields of horror and the gothic as it exists in all forms of culture and literature, but especially within the audio-visual forms of film, television and video games. His research and publications in this field focus on landscape and environment as counter-history within these forms as well as the specific cultural use of form and aesthetics.

Following on from both of these research strands and specialisms, Mark also holds an interest in both marine/environmental representations and gothic horror within children’s culture, reflected in several publications and ongoing research. This traditionally neglected and misunderstood yet vital audience demographic is still one which demands more scholarly focus.

Mark’s teaching specialisms have been within British and American popular film and television but he has taught widely across global screen cultures and disciplines of Film, TV, Media and Communications including convergent screen medias which is also a current research interest.

Mark worked on the AHRC impact case-study ‘Amateur Women Filmmakers in Britain’ and regularly writes and gives public presentations on topics of screen history and theory for local, national and international productions, including for the local history press, Pugmill.

Mark has worked alongside the East Anglian Film Archive (EAFA), both in teaching collaboration at the University of East Anglia and on the research project ‘Amateur Women Filmmakers in Britain’.

Mark is currently working on several projects in collaboration with Dr Marcus Harmes from the University of Southern Queensland.