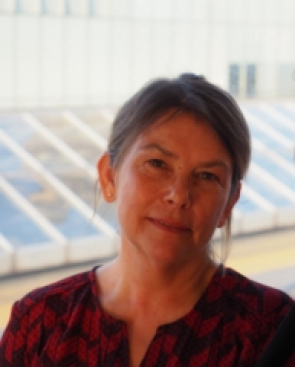 She undertook PhD research at Brunel University, Department of Human Sciences (1988-92). PhD: Television Talk in a London Punjabi Peer Culture. From 1986-87 at the University of London Institute of Education, she studied for a Master of Arts in:Film and Television for Education (Distinction). Dissertation: Audiovisual Culture among South Asian Families in Britain. From 1981-82 she studies at the University of London, St. Mary’s College, Twickenham, for a PGCE (Distinction). Her first degree BSc (Hons) Sociology and Anthropology (IIi) (1971-74) was obtained at that University of Southampton,

Marie is Professor of Sociology at the Open University. An anthropologist and ethnographer by training, the focus of her research and teaching has been on migrant cultures and communication, with a particular focus on South Asian and Middle Eastern diasporas. Recent research includes projects on forced migration and digital exclusion among Syrian, Iraqi and Afghan refugees. Since 2015 she has conducted fieldwork in refugee camps on the island of Lesvos in Greece, and at Za’atari and Azraq camps in Jordan. She has worked with Syrian refugee women on several projects on digital inclusion and civic engagement in concert with UN Women in Jordan.

She has also led several projects on culture and diplomacy, in particular on citizenship in Egypt and Ukraine. She has worked on and with diverse international organisations including the British Council and Goethe Insitut, BBC World Service, France Medias Monde and Deutsche Welle. The central aim of these projects has been to bring reliable ethnographic research to bear on intercultural dialogue and peace-building initiatives in conflict zones.

One of her recent research projects has been on an AHRC-funded project entitled 'Reframing Russia for the global media sphere: from Cold War to Information War?' (www.reframingrussia.com.) This project explores the chaging conjoined geopolitical and media landscapes, Russia's foreign policy including its involvement in Syria, the discourse of information war, conspiracy theories and how and why some audiences use RT as a reference point to understand 'what and how Russia today thinks'.

She has a keen interest in designing interdisciplinary collaborative methodologies. For example, with colleagues at the OU, she designed the Cultural Value Framework which is a theoretically- informed methodology which has been adopted and used as a tool of learning, monitoring and assessment by numerous international organisations. She has also been experimenting with social scientific and computational methods in projects on Arabic, Dari, English, French, Dari and Pashto media.

Most recently, she has been experimenting with an arts-based, collaborative digital ethnography (ABCDE) for a project with asylum seekers and refugees on Covid-19 (www.cov19chronicles.com).  Originally set up to document the first lockdown, two years later, the project has transmuted from its intensely local origins to attarct contirbutors globally.

The cultural politics of commemoration: Media and remembrance of the Russian revolutions of 1917 (2020-06-01)
Chatterje-Doody, Precious N and Gillespie, Marie
European Journal of Cultural Studies, 23(3) (pp. 305-314)