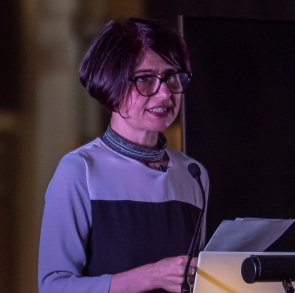 I am a Senior Fellow of the Higher Educational Academy in the UK, having originally trained as a philologist in Romania. I came to live in the UK in 2000, where I gained an MA in Contemporary Religion (Distinction) and a PhD in Religious Studies. I am presently researching and writing on subjects intersecting cultural theory and the anthropology of religion, as I continue to be fascinated by language and folklore, as well as biosemiotic approaches to understanding culture. Before starting my permanent employment at The Open University, in 2021, I held different short- and long-term contracts at several universities in the UK, among which the University of Birmingham, the University of South Wales, Oxford Brookes University and Bath Spa University. My present research is focused on climate activism and contemporary spirituality, Green Christian practices, public rituals, as well as art and performance festivals more broadly.

My current research is centred on climate activism, sustainability and storytelling, particularly in relation to religious practices. My new projects have looked at Extinction Rebellion activism in connection with funerary rites, as I have been interrogating new extinction rituals. More broadly I am interested in the British counterculture and the cultural processes that enabled its development, in the West. As such, I am interested in the early festival culture that developed during the late 1960s and early 1970s, in the UK. In my recent work I have investigated practices and discourses that facilitate cultural change and I am also conducting ethnographic research inside the Extinction Rebellion Movement, via participant observation. I am particularly interested in the artistic and performative dimensions in this movement and the impact of these activities on both the rebels and the public. Other research interests include: green Islam, green prayers and rituals, and spirituality in health environments.

2017. An Altar inside a Circle: A Relational Model for Investigating Green Christians’ Experiments with Sacred Space’, in Material Religion: The Stuff of the Sacred, edited by Timothy Hutchings and Jo McKenzie, London: Routledge, 133-151.

2014. ‘Christian and Muslim Climate Activists Fasting and Praying for the Planet’, in How the World’s Religions are Responding to Climate Change, edited by Robin Globus-Veldman, Andrew Szasz and Rondolph Haluza-DeLay, New York: Routledge, 229-243.

2015. ‘The Ashgate Inform Series on Minority Religions and Spiritual Movements’, edited by Eileen Barker in Fieldwork in Religion, 9 (2): 224-228.

I am currently teaching on two modules: ‘A332: Why is Religion Controversial?’ and  ‘A227: Exploring Religion: Places, Practices, Texts and Experiences’. My past teaching experience, at the University of Birmingham, the University of South Wales, Bath Spa University and Oxford Brookes University, was broadly focused on teaching Christianity and Islam, both in historical perspective and in the contemporary world, alongside New Religious Movements and Alternative Spiritualities.

I am presently collaborating with colleagues in the UK, as well as international scholars in Romania, Hungary and Canada, on a variety of projects and funding bids, concerned with art and performance activities, sustainability and digital humanities. I am particularly interested in conducting research in my native Romania.

Sky vs. Earthly Empowerment: From Angels and Superheroes to Humans and Community in the Marvel Universe and Green Christian Cosmology (2019)
Nita, Maria
The Journal of Religion and Popular Culture, 31(3) (pp. 236-249)

‘Spirituality’ in Health Studies: Competing Spiritualities and the Elevated Status of Mindfulness (2019)
Nita, Maria
Journal of Religion and Health, 58(5) (pp. 1605-1618)