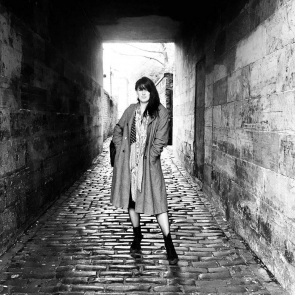 Dr Rebecca Harrison joined the Open University as Lecturer in Film and Media in July 2021. Her research focuses on UK and US film history and investigates the connections between cinema, its industrial practices, and people's experiences of technology (she is especially interested in how gender, race, class, sexuality, and disability affect people's engagement with screen media).

She provides expertise for TV and radio (BBC Radio 4, BBC Scotland, STV, CBC, etc.) and her work as a film journalist and critic appears in a range of broadcast, print, and online media. Dr Harrison also has experience as a curator, including as director of the 2018 Glasgow Feminist Arts Festival.

Her approach to navigating academic and industry spaces is rooted in intersectional feminism. She advocates using and continuing to learn about strategies that make all spaces more accessible and just for marginalised people. She strives to ensure that actions and activism always accompany theory. Her pronouns are she/her/hers.

Dr Harrison's research uncovers histories of material and visual culture. She's excited by feminist and interdisciplinary approaches that help us understand the production, exhibition, and reception of media, and she's also keen to learn more about how identity and power inform people's relationships with technology. For example, her first book, From Steam to Screen: Cinema, the Railways and Modernity (I B Tauris, 2018), revealed how cinema and the railways shaped experiences of modernity and empire in Britain.

Currently, she's conducting research for a new book investigating how the Star Wars franchise is both entangled with histories of analogue and digital tech and embedded in the military-industrial complex. Additionally, she aims to explore the environmental impacts of the franchise's prop and costume making. Her second monograph, BFI Film Classics: The Empire Strikes Back (Bloomsbury, 2020), offers an introduction to her work on Star Wars.

Alongside Dr Harrison's archival research projects she publishes and presents on gender representation, with her writing appearing on curriculums internationally.

Dr Harrison is producing a new shortcourse called 'Film and the Environment' that will introduce students to significant debates about cinema's reliance on the Earth and its resources. She is a Fellow of the Higher Education Academy and has taught a variety of courses on topics including film curation, film's connections to other technologies, and national cinema cultures.

She has experience as a PhD supervisor and examiner and can support postgraduate research on a variety of topics. She invites proposals that take a historical approach to UK and/or US film cultures from the 19th to 21st centuries (e.g., by drawing on the daily press, museum objects, architectural drawings, government records, trade union documents, or film ephemera). Projects addressing histories of marginalised people or communities in relation to filmmaking, distribution, criticism, curation, or audiences are also welcome.

She has organised screenings and arts events in London and Glasgow, and has consulted for local organisations (Glasgow Artists Moving Image Studios, a project to restore a 1920s cinema) and national institutions (National Railway Museum). She has also spoken at festivals, conferences, arts venues, and cinemas across the UK about her research and other aspects of the film industry.

Dr Harrison is a contributing editor for MAI: Feminism and Visual Culture and is on the editorial board of the journal's imprint with Punctum Books. She is a special issue editor for Early Popular Visual Culture, having served on the journal's board since 2015. She is external examiner at Sheffield Hallam, where she supports the BA Film Studies.

Further to her academic collaborations, Dr Harrison has and continues to work with a range of organisations (The 1752 Group, UCU, and Rape Crisis Glasgow and Clyde, among others) to affect change in how the Higher Education sector prevents and responds to sexual violence.

Dr Harrison has contributed to the international membership organisation the Society for Cinema and Media Studies in a range of roles. Currently she is co-chair of the Gender and Feminisms Caucus (formerly the Women's Caucus).

Dr Harrison has also been involved in a network including scholars, activists and NGOs working in support of indigenous communities in Mexico who are responding to and recording the effects of the climate emergency. The work conducted by the network has been supported by two AHRC Global Challenges Research Grants (2018, 2019), on which she was a co-investigator.

Fuck the Canon (or, How Do You Solve a Problem Like von Trier?): Teaching, Screening, and Writing About Cinema in the Age of #MeToo (2018-12)
Harrison, Rebecca
MAI: Feminism and Visual Culture, 1(2)