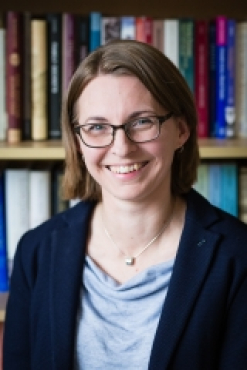 Outside of the OU, I am a fellow of the Royal Historical Society. I am also, together with Prof Heather Shore at Manchester Metropolitan University, editor of a new monograph series published by McGill-Queen's University Press: States, People and the History of Social Change.

Broadly speaking, my research interests lie in a 'long' nineteenth century, c1780-c1914. More specifically, I am interested in the society and culture of nineteenth-century Britain, and particularly themes such as criminal justice, popular culture, education and reading practices.

I welcome PhD proposals on these themes but also on other social and cultural topics in the period of the nineteenth century. Recent and current PhD students have worked on a range of projects including policing in nineteenth-century Leeds, representations of crime in the late nineteenth and early twentieth-century press, unreasonable marital behaviours in Victorian Glasgow, sexual violence by men towards men, and pupil rebellions in public schools between the late eighteenth and mid nineteenth centuries.

At present, I am completing research in three areas: While working as a research fellow on the Reading Experience Database, I began a new research project combining my continuing interests in crime and working-class culture with a developing interest in the history of reading. For several years, I have been working on the general theme of educating criminals in nineteenth-century England. I am interested in both the acquisition of elementary skills by criminals outside and within the prison walls, and also in the transmission of illicit types of knowledge, for example, skills in the commission of crime. Thus far, I have completed a number of articles and chapters on the literacy rates of prisoners and educational programmes designed to reform offenders, and I am also working on a full-length book treatment of this subject. In April 2012, I was awarded a small grant from the Marc Fitch Fund to use surviving prison records from Suffolk to map the educational experiences of the poor in that county for the seventy years or so prior to the 1870 Education Act.

In March 2014, I was awarded an AHRC Early Career Fellowship to complete the research for my book on nineteenth-century prison education. As part of the latter, in 2018 I launched a new resource, Prison History, which makes datasets created during that project freely available in order to expand our understanding of the use and experience of imprisonment in the past. Prison History currently hosts 19th Century Prisons, a database of 846 convict and local prisons operational in England between 1800-99, and Your Local Lock-Up, a database of more than 600 structures used for temporary confinement by local communities between c.1500 and the 20th century. Prison History has featured in the genealogical magazine, Who Do You Think You Are, including as one of the 'Websites to Watch in 2020'.

In August 2019, I was awarded an AHRC Follow on Funding grant to work in partnership with Prisoners' Education Trust and former prisoners to transform the research completed for my monograph, 'Educating Criminals in 19th Century England', into a free badged open course on the history of prison education in the UK. The course will be available to students in secure environments, to prison staff and those working in the criminal justice sector, and to anyone with an interest in the history of prisons in early 2022 on The OU's free learning platform, Open Learn. In 2012 I  completed a monograph derived from my doctoral research on violent entertainments in nineteenth-century London: Violent Victorians: Popular Entertainment in Nineteenth-Century London (Manchester University Press). This book is the first full-length study to address the wide range of gruesome, bloody and confronting amusements and pastimes, patronised by large numbers of ordinary Londoners, that did not conform to the values of respectability and restraint which we so often claim characterised Victorian culture. While pastimes involving displays of actual violence were brought under control during the early-nineteenth century, graphic, yet orderly, ‘re-enactments’ of high-level violence flourished in street or travelling entertainments, penny broadsides, popular theatres, cheap instalment fiction and Sunday newspapers. By examining these predominantly new amusements in detail, this book explores the ways in which gruesome, bloodthirsty and violent representations provided an outlet, indeed siphoned off, much of the actual violence that had hitherto been expressed in all manner of social and political dealings, thus providing a crucial accompaniment to schemes for the reformation of manners and the taming of the streets, while providing a mechanism through which the common people could ‘protest’ against the values of the establishment.

More recently, I combined my interests in popular entertainment and policing to produce a collection of documents for the Pickering & Chatto series, The Making of the Modern Police, edited by my colleague in the history department, Paul Lawrence. My volume, Policing Entertainment (volume 4) was published in autumn 2014. The 6 volume collection has since been reviewed by the Times Literary Supplement (13 March 2015). Between March 2010 and February 2011, I was a Co-I on the AHRC project, ‘Developing an International Digital Network in the History of Reading’ with colleagues in the English department – W.R. Owens and Shafquat Towheed. During this period, the Reading Experience Database (RED) was subjected to major redevelopment: the UK RED website was enhanced, by adding new teaching tools and improving its functionality, in preparation for distribution to colleagues in Australia (Griffith University, Brisbane), Canada (Dalhousie University, Halifax), the Netherlands (Universiteit Utrecht) and New Zealand (Victoria University of Wellington) to allow the creation of other national REDs; and work began on a new international portal housed on the Open University web space to allow simultaneous searching of national REDs in particular fields. For more information, see the RED website.

A full list of my publications which have appeared in print can be found by clicking on the 'Publications' tab above.

I have also completed a number of publications related to my research interests above, including:

'Educating Criminals; or, Where did the 19th-century prisoner go to school?', Social History Blog, April 2018. Read this online.

'The People on the Notes: Elizabeth Fry', OpenLearn, February 2017. Read this online.

'Think entertainment is violent today? The Victorians were much, much worse', The Conversation, 13 October 2016 Read this online.

'Great Expectations: The role of education in penal reform', History & Policy, 27 May 2016. Read this online.

'Jack the Ripper, a women's history museum and London's fascination with all things gory', The Conversation, 31 July 2015 Read this online.

'New evidence points to old Jack the Ripper suspect - but here is why I'm not convinced', The Conversation, 10 Sept 2014 Read this online.

‘ “Life after death”: Legacies of executed criminals in the nineteenth century’, Curator’s Choice: Selections from the John Johnson Collection of Printed Ephemera (2011) Read this online.

Entries on ‘the popular press’, ‘class and the press’, ‘the Penny Sunday Times and People’s Police Gazette’, ‘the Calendar of Horrors’, ‘Thomas Catling’ and ‘George Purkess’ for the Dictionary of Nineteenth Century Journalism, eds. Laurel Brake and Marysa Demoor (British Library & ProQuest, 2008).

I have been interviewed or served as a consultant for a number of television and radio programmes related to my research interests, including on local radio stations (BBC Somerset, BBC Bristol, etc), The Forum (BBC World Service, October 2020) Who Do You Think You Are (Wall to Wall/ BBC One, August 2019), Classified Britain (Radio 4/ Loftus Media, May 2018), Inside... The Old Bailey (Channel 5, 2017), A Very British Murder (BBC4, September 2013), Food: A Scandalous History (Radio 4/ Just Radio, May 2013), Great British Bake-Off (BBC1/ Love Productions, August 2013), Mister Punch (CBC/Battery Radio, May 2012), Sweeney Todd (supplementary materials for the DVD of Tim Burton's film, May 2008).

In June 2021, I was interviewed for a BBC History Extra podcast, 'British Prisons: Everything you wanted to know', available here. Since joining the department I have contributed to a number of teaching modules. Between 2010 and 2013 I was chair of AA312 Total War and Social Change: Europe, 1914-1955 and also of its associated residential school. I wrote several units for its successor module, A327 Europe 1914-1989: War, Peace, Modernity, and in 2012 and 2013 served as co-chair during its production. From 2009 I have been a member of the module team for A825/6 MA in History which is primarily concerned with the local and regional history of the British Isles between 1750 and 1950. I am currently chairing the production of the new MA in history, which is due to be launched in 2022. For a short video introduction to A327, click here.

The great ‘Reading’ experiment: an examination of the role of education in the nineteenth-century gaol (2012)
Crone, Rosalind
Crime, History and Societies, 16(1) (pp. 47-72)