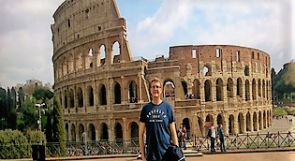 I am a full time PhD student in Classical Studies and Archaeology.

I graduated from Winchester University in 2003 with a BA (Hons) in Archaeology and History. In 2014 I was awarded a Baron Thyssen Scholarship which allowed me to undertake the MA in Classical Studies through the Open University. This qualification enabled me to gain valuable research skills and experience related to Classical academia and my MA thesis was focused around analysing one of the only known Roman Villa complexes in Cornwall. It was from this thesis that my interests in the Roman South-West really peaked, with my PhD project aiming to further explore the impact of Roman interaction with these Iron Age peripheries.

This project will explore the economic history of the southwestern most territory of the province of Britannia throughout the Roman period (55-410AD) through an examination of archaeological evidence. The region of the Dumnonii has been neglected in research due to a perceived lack of archaeological evidence and peripheral location in the Empire. It was, however, a unique region with distinctive natural resources and particularly strong trade links both to other parts of Britannia and the continent.

Existing scholarship has focussed on specific industries (e.g. tin mining, ceramics); however, there has been no comprehensive study of the economy of the region as a whole, looking at the different industries and economic conditions in relation to each other. This project will examine archaeological evidence to investigate trade, existing and imported economies and types and scales of industries. It offers the opportunity to explore this region in-depth and to answer broader questions about the role of seemingly peripheral regions in the Roman Empire.

The study will focus on three principal research questions:

As well as incorporating a significant theoretical background, this ‘bottom up’ approach of using and analysing a range of archaeological material culture evidence should allow for typological, chronological and comparative analysis ultimately creating an overall history of the region’s economy. The project will identify indicators that can be used in a wider geographical framework to aid our understanding of peripheral regions in the Roman Empire where evidence may be sparse or limited academic emphasis has been placed.

Thesis Subject: The economic history of the civitas Dumnoniorum

I completed my PGCE in 2010 and since then have delivered on various programmes at Truro and Penwith College in Cornwall, an ofsted outstanding educational institutional. Here I have experience teaching on A Level Classical Civilisation, Archaeology and Modern History. For the last 10 years I have delivered on the FdSc and BSc Archaeology programme through Plymouth University and have been a module leader developing, planning and delivering content.

I regularly deliver short recreational courses to enhance interest in Archaeology in the area, something I intend to use my research to continue to develop