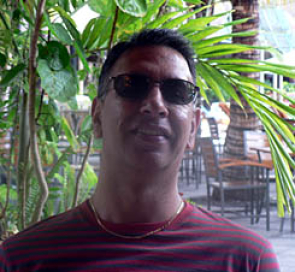 Born in Mauritius, I have a PhD in History from Warwick and MA and BA degrees from SOAS and Kent respectively. I have taught at Birkbeck and Cardiff and previously worked for Save The Children Fund for a decade. This campaigning background has influenced my research interests which are focused on India and on the southern world, and I remain committed to radical perspectives in history writing.

I came to the Open University in 2003 as staff tutor in Bristol and lecturer at the newly established Ferguson Centre for African and Asian Studies, joining the History Department in 2008. I am also currently a member of the International Development and Inclusive Innovation Research Group and the OpenSpace Research Centre in FASS. I was Director of the Ferguson Centre from 2016 to 2019.

Beyond the OU, I am amember of the Arts and Humanities Research Council's Overseas Development Assistance (ODA) Peer Review College.

My research is primarily focused on India/South Asia and combines social history with historical geography, and presently I have a particular interest in the themes of food, environment, climate, and development. I also have a broad interest in colonialism, especially in relation to commodities and cities. I would welcome enquiries from prospective research students in any of these areas.

I have completed four major externally funded projects. I was Principal Investigator on an AHRC-funded Global Challenges Research Fund (GCRF) project, Changing Farming Lives in South India, Past and Present (2017-20) which involved a collaboration between UK researchers and  the NGO Green Foundation based in Karnataka, India. Using oral history, the project documented women small farmers’ importance in the maintenance of cultural heritage and traditional knowledge crucial to food security and agricultural resilience in the face of a warming climate. An article about the research titled ‘Our grandmother used to sing whilst weeding: oral histories, millet food culture, and farming rituals amongst women smallholders in Ramanagara district, Karnataka’ has been published in Modern Asian Studies (2020).

A major follow-up GCRF project on the revival of millets in southern India was recommended for funding, but following the UK government’s devastating and much criticised cuts to official development assistance and their impact on the GCRF, the AHRC cancelled the award in March 2021.

I was PI and Co-Director (2007-16) of a British Academy interdisciplinary research project, Commodities of Empire, with Professor Jean Stubbs, then based at London Metropolitan University. The project pioneered a fresh approach to the study of colonialism and empire, holding an annual workshop that showcased new research projects and initiatives on this theme and brought original perspectives and insights from the world beyond Europe. In this context, I co-edited a special issue of the Journal of Global History (spring 2009, vol.4, no.1) on the theme of 'commodities and empires'.

The article I submitted for this issue, on the commodities-driven, simultaneous but unequal production of Bombay and Glasgow as modern global ports won the 2009 David Berry prize awarded annually by the Royal Historical Society for the best article on a subject dealing with Scottish history. Commodities of Empire moved to SOAS in 2016 where it continues to flourish under the guidance of a new generation of scholars.

Growing international interest in the commodities approach during this period led to another successful bid, to the NWO (Netherlands), for a collaborative research project Commodities and Anti-Commodities with colleagues from Wageningen University (2009-13). This research revealed hitherto hidden instances of sustainable modes of indigenous farming in Africa, Asia, and the Caribbean during the colonial era, and led to the publication of a book titled Local Subversions of Colonial Cultures: Commodities and Anti-Commodities in Global History (2016) which I co-edited with Dr Harro Maat of Wageningen University.

I was also Principal Investigator on a related AHRC-funded digital history project, Commodity Histories (2012-16), which was the first digital resource in the UK to focus on the histories of Africa, Asia, the Caribbean, and Latin America. The website provided a public forum for researchers working globally on the history of commodities to speedily publish new work and share news and events from their part of the world. Hosting a range of articles, sources and materials, it continues to function as a key teaching resource on commodities.

A full list of my publications can be found by clicking on the 'Publications' tab above.

During the Covid-19 pandemic, I contributed an article to the series of blogs on 'Reading and Wellbeing' organised by the History Of Books and Reading Group (hobar) titled On re-reading The Plague during lockdown after half a century

In February 2019, jointly with partner Green Foundation, I presented the research findings of the Changing Farming Lives project to the International Development Select Committee (IDC) of the UK Parliament in the context of a conference on Mobilising Global Voices held at the House of Commons aimed at fostering links between academia and Parliament and between Global South and North. The project was also recently highlighted by UNESCO in the context of its work on cultural heritage and climate action, featuring in a major UNESCO conference on Heritage and our Sustainable Future in February 2021.

I was academic consultant for the BBC documentary series Dangerous Borders: A Journey Across India and Pakistan, broadcast on BBC2 in August 2017, and this role fed into the production of teaching materials on OpenLearn. Previous work on the emergence of a modern Indian press linked to radical nationalist voices in early 20th century Bombay, as featured in my book The colonial city and the challenge of modernity, led to an interview for BBC Radio 4’s Printing A Nation series which was broadcast in April 2017. Both productions were highlights of a BBC season marking the 70th anniversary of the independence of India and Pakistan.

I have spoken at AHRC events, made presentations to Indian farmers and NGOs, and given talks at the Royal Botanical Gardens, Kew.

The main external collaborations have been with: the NGO Green Foundation India, on the research project Changing Farming Lives in South India, Past and Present (2017-20); Wageningen University, Netherlands, on the Commodities and Anti-Commodities project (2009-13); London Metropolitan University, on the Commodities of Empire project (2007-10); and with the now vanished British Empire and Commonwealth Museum, Bristol, involving fortnightly seminars held at the Museum over two successive academic years (2003-05).

'I remember when it used to rain well and we could trust the weather'. Women's stories of changing farming lives in southern India. (2020-05-14)
Hazareesingh, Sandip
Open University, Milton Keynes, UK.

Chasing commodities over the surface of the globe: shipping, port development and the making of networks between Glasgow and Bombay, c.1850-1880 (2007-10-23)
Hazareesingh, Sandip
The Open University, Milton Keynes, UK.