Has US politics reached crisis point? 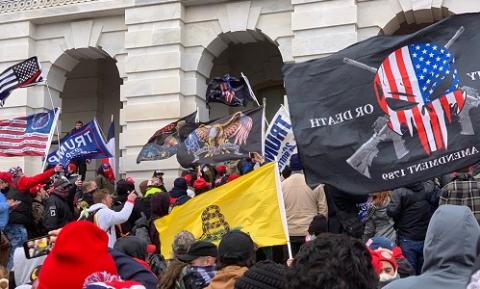 The UK woke on Thursday 7th January to reports of four deaths and ongoing chaos, following riots at the Capitol. Dr. Sinead McEneaney, Lecturer in History, with a focus on American History of the 1960s and ‘70s, shared her immediate thoughts:

“You’re getting me at a particularly pessimistic moment this morning. I’ve been a student of American history and politics for over 20 years, and while I am not surprised that we have arrived at this point, I am sad and shocked by the extent to which political elites in the Republican party have been fanning the flames of ignorance with lies and conspiracy theories.”

Sinead’s thoughts echo those of Politics lecturer, David Galbraith, appearing today on Radio Cumbria to talk on the subject:

“The rhetoric from President Trump since the time of the election in November has been a one of denial of the legitimacy of the result. The main focus of his pronouncements is not about dealing with the pandemic but actually truly talking about the legitimacy, the illegality of the American elections, and there's been a stoking of the flames.”

Sinead delves in, adding detail to explain why many are experiencing such shock at the scenes we’re currently witnessing:

“The events at the Capitol yesterday were unprecedented, and I think it is not incorrect to call this an attempted coup. On a day marked by the election of the first ever Black Senator from a Confederate state, the attacks by Trump supporters on parliamentary government illustrates how the fissures of the past – the Civil War, Reconstruction era, and Civil Rights period -- have never been fully resolved.

“This crisis has been years, generations, in the making. Fuelled by systemic racism, economic inequality, an under-resourced public education system and the intentional sabotage of bipartisan politics (mostly by the Republican Party), the United States is dangerously divided. As Abraham Lincoln warned in 1858, “a house divided cannot stand.” It is unlikely that the incoming Congress and President will be able to mend these divisions, within a divisive climate encouraged by mainstream and social medias. The only salve will be a wholesale change of political culture.”

What should we be able to expect from our leaders? David critiques the nature of the messaging coming from Trump:

“There was a mixed message from President Trump yesterday: On the one hand, belatedly, he asked the protesters to withdraw from Washington and the Congress building, but at the same time he’s saying he loves them and is praying for them. There's a kind of a sense of a mixed message there, saying ‘we don’t still accept the result’.”

What comes next? Will these scenes continue up to and including Joe Biden’s inauguration? David concludes:

“It’s highly unlikely that the President Trump will attend the inauguration ceremony for Joe Biden. But of course, the annoyance, and the frustration of those who voted for Trump and who believe the election was stolen will still be somewhat agitating, so quite what they will do or the minority of them will do is still hard to say.”

Listen in to David Galbraith’s interview on BBC Sounds here from 1:13:03.

Interested in studying History or Politics at The Open University? Explore some of our free learning.

Find out more about our research here.

Read more from Sinead: 'Is America better than this?'