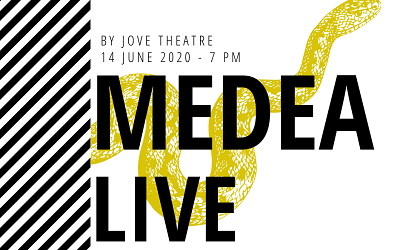 This blog is written by Dr Christine Plastow, Lecturer in Classical Studies at The Open University.

Since 2011, I’ve been a part of By Jove Theatre Company, a theatre collective with a feminist, socialist ethos that tells old stories in new ways. We’re interested in what it means for something to be part of ‘the canon’: why do we tell the same stories again and again, and how can we return to them in ways that are relevant—politically, socially, emotionally—for modern audiences? This mission has led us to create retellings of Shakespeare and Austen, but most frequently it brings us back to much older stories: the myths of Greek tragedy. Over the years we’ve performed retellings and re-imaginings of Euripides’ Bacchae and Medea and Aeschylus’ Oresteia, as well as new poetry inspired by characters from Homer’s Iliad and Odyssey.

Theatre, an art form and industry that has traditionally relied on the gathering of a (sometimes large) group of people in close quarters, has naturally been hit hard by the global coronavirus crisis. Not only productions but rehearsals and development sessions have had to be cancelled or postponed, and many theatre professionals are still out of work. There have been some benefits for audiences: for example, the National Theatre has been freely broadcasting a number of recordings from its back catalogue on YouTube. These recordings have opened up major productions to viewers who may otherwise never have seen them. But what about smaller theatres and companies, new work, and the ‘liveness’ that is, in many ways, intrinsic to the medium of theatre?

At By Jove, we’ve been experimenting since March with ways of continuing to work in lockdown and at a distance. We started with weekly one-hour writing groups, setting a prompt and preparing new pieces of writing related to our ongoing project re-examining the myths of Orestes, his siblings, and his lover Pylades. Our way of working is always collaborative, with the task of writing assigned not only to our resident ‘writers’ but to anyone in the company who wants to experiment with putting words to paper. Hearing company members read new work over Skype reconnected us with each other and with the material we’ve been working with for over a year now. This led us to organise a longer online writing workshop, guided by the project’s head writer Wendy Haines. Wendy led us through a number of writing exercises exploring mundane scenarios from the perspectives of mythic characters—a theme we’re keen to explore in the Orestes project, as we look for the quiet human moments in the grand tragic narrative.

But these workshops, as valuable as they were, were focused on generating new writing, while what we really needed to do was explore what kinds of performance were possible in lockdown. A ‘digital staging’ workshop, again led by Wendy, opened our eyes to the possibilities in this area. Each participant was assigned a piece of writing and given 30 minutes to ‘stage’ it for performance over video call. Contributions included creative uses of screen-sharing, virtual backgrounds, point-of-view video, music performed live over a pre-recorded reading, and much more—and showed us that technology that may on the surface seem to restrict movement, dynamism, and emotional connection can, in fact, be incredibly stirring and explore ‘liveness’ in all sorts of ways.

The outcome of our experimentation with digital performance had to be putting it out there for people to see. As is so often the case, we were drawn to Greek tragedy for our content. The narrative form of Greek tragedy deals with the moments of crisis in longer mythic narratives: each play tells a story almost in real-time, with characters forced to confront their own actions or those of others that have, almost always, led to death. This form seemed particularly apt for the moment of a global pandemic; indeed, Theatre of War’s digital Oedipus Project has already touched on that play’s backdrop of plague and pestilence as the most obvious touchstone for recent events.

In order to get things together as quickly as possible, we decided to re-imagine two of our productions from 2017 for the digital stage. The first, Medea by Wendy Haines, was performed and streamed live on YouTube on Sunday 14th June. Haines’ version of Medea is a modern one, with an almost sole focus on the woman herself as her inner monologue is split between three voices. In our digital version, Medea is as housebound as her audience; the play illustrates a domestic situation that has become a prison. Medea’s story is also a particularly suitable one to explore in a technologically innovative production: when Euripides’ Medea was first staged in 431 BCE, it may have been the first time that audiences had seen a human character lifted off the stage by the mechane, the crane-like device most commonly used by Greek tragic poets to achieve the deus ex machina, the arrival of a god to set human affairs straight. Director David Bullen used the capabilities of the streaming platform Streamyard to move the Medeas around the screen, with blank screens appearing for the voices of Jason and other characters that are not embodied; the Medeas seemed to be circling, trapped in an inescapable situation and closing in on acts of terrible violence. Meanwhile, performers SJ Brady, Sinead Costelloe, and Rosa Whicker moved around their performance spaces, sometimes closer to the camera and sometimes further away, offering a tantalising glimpse into the private space of Medea’s unhappy home. The performance was followed by a post-show discussion with theatre and classics academics and practitioners; both are still available to view on YouTube (with closed captions available).

The second production, Here She Comes, written and performed by SJ Brady with music by Vivienne Youel, is an epic poetic retelling of the story of the Bacchae from the perspective of Agave, the queen of Thebes who heeds the call of Dionysus to join the maenads in the forest outside the city and ends up murdering her son, discovering that sometimes what looks like liberation is just subjugation to a different force. In the interest of making work that is as accessible as possible, we decided to record the performance as a radio play, meaning that audiences would not have to be tied to a screen in order to experience it. Although Bacchae is another work of Greek tragedy, this production is designed more closely to evoke the ancient oral poets who performed long tales such as the Iliad and Odyssey; SJ Brady performs the text solo, from memory, focusing on Agave but giving voice to a range of characters and utilising repeated linguistic motifs. The radio play will be released on By Jove’s Soundcloud page on Sunday 12th July, along with an accompanying podcast discussion between me and By Jove’s co-artistic director and theatre academic David Bullen on the original Greek tragedy and our retelling.

You can keep up to date with By Jove on Twitter, Facebook, and Instagram. The company receives no regular public funding, and so relies on supporters to help them make art. If you’re interested in supporting the company, you can become a regular patron on our Patreon.

Medea Live is free to view until 31st August, 2020; if you enjoy the show, please consider making a donation.