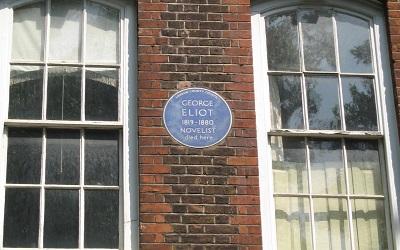 The Institute of English Studies has kindly allowed us to reproduce this work for inclusion in the OU's new Arts and Humanities in the time of COVID-19 online series. In this article, we reproduce the work of Delia da Sousa Correa, Head of Department in English and Creative Writing, originally published 7 September, 2020.

At the start of the current pandemic lockdown I started an umpteenth re-reading of Middlemarch. I will be writing briefly on the novel for our new MA, but this choice of reading was as much for my own sanity as for reasons of work. As always, I found so much to appreciate that I had forgotten, or had not even noticed in previous readings. In the early days of the pandemic my daily prescription was to make time to read a chapter or two of this favourite novel, sometimes, in those days of unreal quiet and sunshine, in the shade of the weeping crab-apple that dominates my tiny garden. That was wonderful when all was quiet – but as it often wasn’t, with neighbours scarcely at social distance, I took to reading aloud to screen out the sound of their mobile phones; I wonder what they made of that.

Reading the novel this time I was, unsurprisingly, more forcefully struck by the importance of Lydgate’s medical mission for Middlemarch: the establishment of a separate hospital ‘for fever in all its forms’ but taking particular impetus from the expected arrival of cholera in the town. What had previously remained in the background now came to the fore. How had I previously failed fully to notice the prevalence of references in the novel to this imminent threat to public health and the acute level of fear that accompanied the prospect?*

Other fevers feature also. Lydgate has made a particular study of typhoid fever in his training and research. He is eager to read Pierre Charles Louis’ ‘new book on fever’ published in 1829, and thus new within the 1830s setting of Eliot’s novel. Previously, as a student in Paris, Lydgate had known Louis and attended ‘many anatomical demonstrations in order to ascertain the specific differences of typhus and typhoid’. ‘Fever’ is an almost personified force that provides ‘delightful labour’ for Lydgate’s mental powers. His exacting application of both reason and imagination to the investigation of ‘obscure conditions’ exemplifies the discipline he brings to his study of science (but, sadly, not to ‘the complexities of love and marriage’).

Lydgate is thus perfectly placed to recognise in Fred Vincy the early stages of typhoid and to recommend the most effective treatment. The domestic panic that ensues is real enough, albeit rendered comic by Mr Vincy’s indignant exclamations that it is ‘no joke to have fever in the house’. Dinner guests have to be put off for an indefinite period to come and Vincy settles on his own form of lockdown inoculation, ‘I shall drink brandy,’ added Mr Vincy, emphatically – as much as to say, this was not an occasion for ‘firing with blank-cartridges’. Later that evening, after he has been ‘keeping a sharp fire on the enemy Infection’ and become ‘a good deal heated in consequence’, Mr Vincy upbraids their regular physician, who has failed to make an accurate diagnosis: ‘this is beyond a joke … To let fever get unawares into a house like this. There are some things that ought to be actionable’. Mayor Vincy has strayed into the language used ‘to rebuke offenders with an official air’. Such language is ridiculous as applied to the workings of disease, yet as we currently know, our experience of life under the threat of infection is hugely impacted by the actions of the ruling powers in the land. Vincy might as well be chastising his family doctor for his failure to ‘stay alert’.

Meanwhile cholera is progressing towards Middlemarch, foreshadowed with disarming lightness in an apparently stray piece of satirically-imagined gossip amongst scientifically ignorant Middlemarchers appalled by representations of data such as ‘the cubic feet of oxygen yearly swallowed by a full-grown man … “Oxygen! nobody knows what that may be – is it any wonder the cholera has got to Dantzic? And yet there are people who say quarantine is no good!”’

From Danzig to London, where the appearance of cholera causes the banker Bulstrode to express fear that his own ‘susceptible’ constitution ‘would be especially liable to fall a victim to cholera, if it visited our district’. As a doctor, Lydgate takes the view that ‘good practical precautions for the town’ are the best protection rather than the religious piety Bulstrode evokes. He and Bulstrode discuss cholera once more alongside the prospect for political reform – both topics that keep them away from discussing a disquieting immediate event, the death in Bulstrode’s care of Raffles, a character threatening to reveal details of the pious banker’s shady past. But as always in Eliot, all things are connected – whether metaphorically or at the level of plot.

Bulstrode’s disgrace comes about as a result of cholera’s actual arrival in Middlemarch. An urgent meeting is called to discuss the management of the first case of the disease and the public health measures required. These measures are not detailed. At the time of the novel’s setting, it was not yet established knowledge that cholera was a bacterial infection carried by water – hence, presumably, Lydgate’s intention to include it as part of his scheme for ‘treating fever on a new plan’ alongside other fevers in a segregated hospital; a plan which would also offer the opportunity to ‘demonstrate the specific distinctions of fever and test therapeutic results’. The distress this first case causes more generally in the town is exemplified by good Mrs Bulstrode, whose fervid hope under the ‘awful visitation’ is that there will be ‘no more cases of cholera to be buried’ in the churchyard. An epidemic of cholera as such is not visited upon Middlemarch, although on this re-reading I was aware that the novel nevertheless conveys a sense of its ongoing threat.

It is at this meeting to discuss the arrival of cholera that the public men of Middlemarch, who have been enlightened as to the dishonourable past actions that secured Bulstrode his wealth before his arrival in Middlemarch, cast him out.

There is nothing casual about references to cholera and fever in this novel, either at a general level, or in relation to Bulstrode’s particular case. His premonition of his coming disgrace has been like the ‘shiver and ache of oncoming fever’. Bulstrode’s own life in the town has been a case of hidden infection that also originated in London; Mrs Bulstrode’s anxiety that further cases of cholera would be a nasty surprise in so ‘healthy’ a spot as Middlemarch deftly prefigures the actual nasty surprise she is about to suffer in learning of her husband’s morally diseased past.

Cholera’s travels map onto the spatial metaphors that make ‘the dark territories of Pathology’ an ‘America’  for discovery to Lydgate. Lydgate feels the need of a ‘fundamental knowledge of structure’ to underpin his growing interest in ‘special questions of disease such as the nature of fever or fevers’. Every reader of Middlemarch is made aware of some of the many ways the novel communicates complex and intimate webs of connection, with the circulation of blood, money, writing, news, gossip, politics, disease and more all belonging to interconnecting structures of causation and contingency.

Cholera circulates like the gossip that fear of it generates. It is one among a myriad of ‘special questions’ that are integrated into the novel’s complex webs of metaphor and action – but one that now takes on a greater prominence in my own reading. When the narrator of Middlemarch comments that the ‘imminent horrors of Cholera’ belongs like railways and the Reform Bill under ‘exciting’ topics to talk about this no longer feels exclusively satirical to me. Eliot’s notebook for the novel, with typical care for historical accuracy, records that cholera appeared in Sunderland and Newcastle in 1831, spreading to Edinburgh and London in 1832. In the month she herself had turned 13, in November 1832, the curate in their church at Chilvers Coton had banned the parish wakes, ‘on the dubious grounds’ says Eliot’s great biographer Gordon Haight, ‘that people coming from places around might bring the cholera with them’. Or perhaps not such dubious grounds as it seemed to Haight in 1968 America, albeit grounds convenient to a killjoy clergyman. Cholera, originating in Asia,  remained a killer for some time thereafter with three further pandemics no doubt facilitated by the international trade networks then existing. In 1854 when she was away in Weimar, Eliot received news that a cousin of John Chapman, for whom she had edited the Westminster Review, had died of cholera. Many of Eliot’s readers will also have experienced fear of this approaching disease and the suffering and loss that accompanied it. For them, Eliot’s allusions to ‘fever in all its forms’ must surely not have been passed over entirely lightly and the importance of Lydgate’s ultimately thwarted mission must have appeared with considerable force, whether or not they took a detailed interest in the scientific details of his researches. Perhaps we ourselves now have a basis for stronger empathy with these earlier readers of Middlemarch.

Note from the author
*This is a lightly contextualised personal response to re-reading Middlemarch in lockdown. Having gone on to investigate existing research on the topic of cholera in the novel I strongly recommend any readers with a scholarly interest in this topic to go to the following superb essay by Mary Wilson Carpenter: