Social Analysis and the COVID-19 Crisis 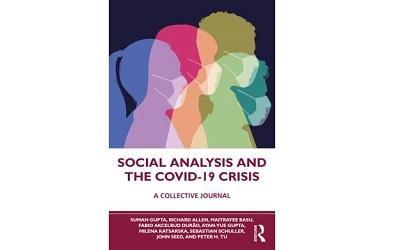 This blog is written by Professor Suman Gupta, Chair in Literature and Cultural History in the School of Arts and Humanities at The Open University.

I was in Delhi on 23 March 2020 when the lockdown was announced. As it turned out, I was to stay there for the four months to come, only managing to make my way back to London in August. At the time, I was in the midst of conversations with several friends. Some of these had started decades back and showed little sign of fizzling out, others a few months earlier and were coming into their own. Each of these conversations had distinct impetuses: shared political and academic interests, the pleasure of having lived together, the familiarity of having worked side by side, curiosity about the different contexts we live in -- with as much common ground and difference as friends usually have. It so happened that we were fairly widely dispersed, apart from Delhi (India) and London, also Birmingham (UK), New York State (USA), São Paulo State (Brazil), Plovdiv (Bulgaria), and Munich (Germany).

By the middle of March the various strands of these conversations, following different interests thus far, were already beginning to converge. To some degree, this was a thematic convergence. All the concerns and concepts we had been talking about, some of longstanding interest and others more immediate, were becoming conditional to the Covid-19 crisis. It increasingly seemed expedient to ask whether a particular issue or notion was being altered by the Covid-19 outbreak, or whether it was somehow accentuated, or whether it had in fact become irrelevant. The Covid-19 condition seemingly presented an inescapable grid in terms of which almost any subject or object could be mapped or relocated. Something similar can be traced on a large scale in news media. The diversity of reportage, for different countries, policies, pursuits, conflicts, productions gradually became reoriented with regard to the pandemic. The standard pages on politics, international relations, daily affairs, finance, crime, culture, celebrity, sports in broadsheets and websites were all talking about the COVID-19 context incessantly and not talking about much else.

The thematic convergence in our exchanges was, however, not moulded by the pervasive media focus. Our dispersed lives and varied interests were not finding connections simply because of a dominant mediascape or by some connecting threads in our academic and ideological inclinations. Utterly extraordinarily, as much in India, as in the USA, Brazil, the UK, Germany or Bulgaria, the COVID-19 crisis was materially restricting our everyday lives more or less in concert. The process of trying to embed social distancing and impose lockdowns necessarily followed analogous paths. On 11 March WHO declared COVID-19 a pandemic. For my correspondents as for me, social distancing measures and then lockdowns appeared soon after within March. In Bulgaria, a state of emergency was declared on 13 March. New York State, USA, went into lockdown on 16 March; Germany on 22 March; the UK and India on 23 March; São Paulo State, Brazil, on 24 March. However, since we were in conversation with each other, it was also evident to us that we were experiencing this common process in very different, contextually-nuanced ways. Just as tabulations of countrywide statistics allow meaningful comparison and, concurrently, differentiation, so the fact that we had the common denominator of lockdown measures served to sharpen the distinctive social dimensions of the cities and towns we were living in.

The experience of being in lockdown wherever we were gave us more time than we would normally have. Even amidst working from home time often hung heavy. The upheavals that we knew were taking place around and yet beyond our unexpectedly cloistered lives were unsettling. It felt like a time to urgently reassess received ideas and preconceptions, to observe the growing tension in social life the more keenly. In fact, many of these tensions had been in our conversations for a considerable while, were already at the heart of those ongoing conversations. But now their lines seemed to become taut to breaking point, some sort of snap seemed imminent. So, as our various conversations converged, our exchanges became lengthier and more searching. The different conversations bled into each other.

The observations that were being thus recorded were of their moment, specific to the day and place they were written in; at the same time, with little nudges and cross referencing and redistribution, the interventions spoke to each other fluidly and yet coherently, and assumed the form of a collective journal.

This journal, stretching from March to early May, has been published as a book entitled Social Analysis and the Covid-19 Crisis. It presents a process of thinking -- usually troubled, always uncertain -- rather than setting out rounded formulations and conclusions. None of its authors strove to be consistent or sought consensus. Trying to contain the excess of uncertainty and unease made consistency meaningless. Establishing consensus seemed a future task. The book is a record of a collective attempt to make sense of an extraordinary juncture as it unfolded.