The (In)Visibility of Migrant Domestic Workers during Covid-19 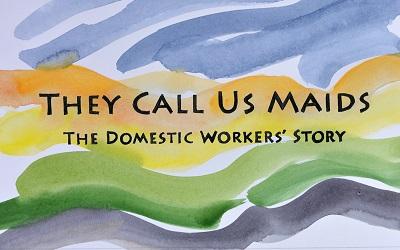 Amy Charlesworth, Lecturer in Art History at The Open University, talks to Marissa Begonia, founder and director of the charity, Voice of Domestic Workers (VoDW). Every year the organisation rescues up to 90 workers who are escaping abusive employers. During the pandemic, in 2020, the number went down to just 6. Amy picks up on research she carried out previously with VoDW and with the help of Marissa they track the changes and the difference the pandemic has made to domestic workers and to the vital “social reproductive labour” they carry out often out – mostly invisible to society.

All images by Leeds Animation Workshop, They Call Us Maids: The Domestic Workers’ Story, 2015

Between the years of 2013-2016 I worked closely with ‘Justice for Domestic Workers’, a grassroots campaign group which sought to provide practical, emotional and educational support to undocumented migrant domestic workers in the UK. One part of our collective work involved making film to raise awareness about the impact of the decision, by then Home Secretary, Teresa May, to change the oversees domestic workers’ visa to one which tied the employee to their employer. This new visa regulation meant that if domestic workers had to leave their employment for any reason, including abuse, they were left undocumented.[1]

The resulting film, They Call Us Maids: the Domestic Workers’ Story (2015) is a short animation which fuses a number of personal testimonies (voiced by actors) to reveal both the individual and collective struggle faced by undocumented workers in the UK. Animation was chosen as it doesn’t date in the way that documentaries in realist style often do.  The aim was to facilitate a skills and knowledge exchange in which the domestic workers experimented with animation techniques whilst we learned about the specifics of their experiences. It was important to protect the identity of those who contributed to the film given their precarious lives.[2] We worked closely with Leeds Animation Workshop, a feminist collective established in the late 1970s, who have lengthy experience of working alongside marginalised groups on sensitive and urgent social issues[3]. This film remains highly relevant to this day. So what if anything has changed?

As a contribution to Covid Chronicles project, in July 2021 I spoke with Marissa Begonia (founder and director of the renamed charity Voice of Domestic Workers (VoDW) about the pressures and challenges that they have faced throughout 2020-2021. For an already highly precarious workforce the impact of Covid-19 has resulted in numerous complications for vulnerable migrant domestic workers here in the UK. I began by asking Marissa what some of those key issues were.

Marissa opened our discussion by noting that the elongation of the already long working day has been a shared experience during the pandemic for many domestic workers. For some, this means expanding the work from 16-hour days to never ending domestic labour because having whole families at home (rather than out at work and school) substantially increased the cleaning, cooking and caring work which was already substantial. 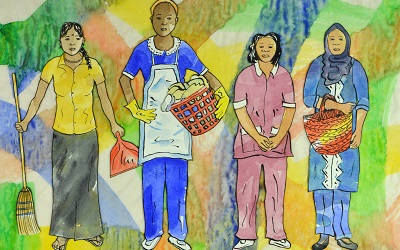 A consequence of employers working from home has resulted in almost round the clock surveillance of workers and reduced privacy. The effects of this will be long felt as workers have not been able to communicate effectively amongst one another, attend their counselling sessions (provided online via VoDW), or undertake their work with the charity and, indeed, maintain friendships and solidarity with other workers, let alone keep in touch with their own families, mostly still residing in their home countries (largely the Philippines).

Already subject to the withholding of pay, passports and phones, Marissa recounted examples of employers using the pandemic as an excuse for not being able to pay wages, claiming furlough while they continued to work from home. Many domestic workers are here in the UK on visas that have expired, employers, therefore, know there is no recourse for their employees to refute or challenge allegations of abuse. For many workers, violence - physical, sexual, mental and financial - is a daily reality, this too intensified for many throughout 2020. Workers (and they are almost exclusively women) were locked in with their abusers, their undocumented status meaning fear from the police and the threat of homelessness contributed to an unrelenting stasis confinement. Marissa (along with other members of VoDW) rescues between 50-90 workers escaping from abusive employers each year, in 2020, this went down to just 6. 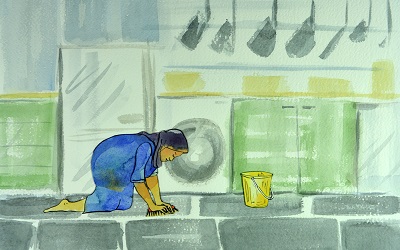 Whilst the effects of the pandemic further entrenched some of the deep inequalities outlined above, the specifics of a public health emergency on an unregulated and unprotected workforce were, unsurprisingly, more keenly experienced. As the home and workplace coexist for members of VoDWs, no control is afforded for keeping domestic workers safe from the virus. Many recounted their employer’s decision to continue hosting guests and participate in household mixing throughout the lockdowns in the UK. Many workers contracted Covid-19 through this, resorted to making their own PPE out of binbags and were forced to continue caring for families despite becoming very unwell with the virus.[4] Marissa undertook long and supportive phone calls with workers to assist them accessing the vaccine under the remit of those who worked in social care from January 2020 onward but many, if not most, were turned away from GPs and vaccine centres due to absent NHS numbers, or due to a fear of having to reveal personal details which might, in turn, alert authorities to their undocumented status in the UK.[5]

VoDWs is a not-for-profit charity that arose as a grassroots support group which sought to build solidarity and grow skills and knowledge of worker rights in the UK. The social aspect is what holds this group of people (and their supporters) together. One aspect of their skills training, IT classes, became more crucial throughout 2020. However, many experienced digital poverty and so could not purchase data or access to smartphones and computers due to the withholding of wages, and as a result greater isolation ensued. 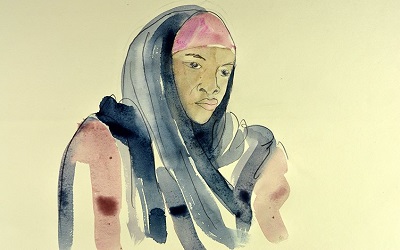 A key campaign statement for VoDW is: ‘Domestic Work is Work’. Social reproductive labour is integral to a functioning economy, some UK press has covered the disproportionate effects on women throughout the pandemic (they have undertaken more childcare, household work, home schooling, and, as a result, been forced to either quit jobs or access the furlough scheme).[6] They Call Us Maids: the Domestic Workers’ Story and the experiences of migrant domestic workers in the UK throughout the last 18 months is part of a complex picture and longer history throughout the 20th century, but particularly since the 1970s, which sees the drafting in of (largely) women of colour, or women of lower socio-economic privilege, into private households to undertake all the work that enables a family to work. For workers whose class, race and gender coalesce along the most unequal lines in our society, undertaking labour, which is the most undermined and undervalued, vulnerability is acute.

It is crucial to end on the campaigning work VoDW have continued to do throughout 2020-21. For example, social media campaigns and the effects of a retweet from high-profile figures such as the journalist, Owen Jones, resulted in over £20,000 being raised which went straight to individual domestic workers for emergency accommodation and food. Moving larger events online has also brought benefits to widening audiences and preserving audio-visual assets for future profile raising and sharing of resources for the charity. Despite extreme hardship, some of which is discussed above, VoDW continues to campaign, to fight for migrant workers’ rights in the UK and, now the UK government has lifted restrictions from the 19th July 2021, have been able to return to the essential socials so characteristic of this joyful and radical group of women.

Please consider making a donation to the VoDW Covid-19 hardship fund here where you can also browse the VoDW website and updates on campaign activities.

[2] The film has been screened at over 40 film festivals across the UK and internationally. In 2016 it won two awards, one for best short screenplay at the Philippine International Film Festival, Los Angeles and was shortlisted for the AHRC Award for Research in the Arts – Innovation Award. In 2017, it won the Film Ambassador Trophy, awarded by the Film Development Council of the Philippines, and was awarded The Best Film on Modern Slavery in the UK (March 2018).

LAW are a not-for-profit co-operative who rely on income from screening to maintain the running costs of the organisation. The full film is available to buy for £15.00 from here.

[4] See a short film made by members of VoDW here

New York Times, 30th March 2021 which cites the support of Doctors of the World UK who also worked with VoDW on this issue.

[6] See the work of UK based campaign group Pregnant then Screwed.