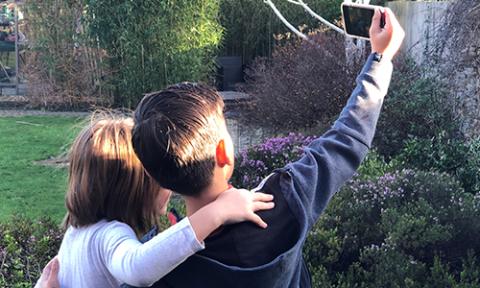 The routine use of online environments in many families means that children now have, or have the potential to have, immediate free access to communication with extended family. In this sense, family networks can be seen to have outgrown their geographical limits which has become particularly amplified during Covid (Dann et al. 2020*).

The Networking Families Research Group comprises a team of researchers from four universities working in partnership with Parent Zone on improving outcomes for children in a digital world. In a recent presentation Professor Rose Capdevila and Dr Lisa Lazard summarised the progress on the eNurture/ESRC funded project Supporting children’s mental health through familial online relationship.

The study addresses the research question: How do young people make sense of their parents’/caregivers’ online sharing? It focuses on supporting children’s mental health rather than addressing mental illness and is part of a wider research programme on the dynamics of digital family life. The project aims to harness elements of existing online practices to support constructive and protective engagements within the family on and offline. Given this, the project aims to capture these relationships and explore how the affordances of existing software, along with evolving family online practices, can be reconciled to support young people’s mental health.

Given the diversity in what constitutes family in contemporary life, participants were asked to self-define their family and identify relevant members to contribute to the interviews. Five families were interviewed as a group (N=5), followed by individual interviews with each family member (N= 16). Each family had at least one member aged between 13 (as per standard social media user requirements) and 18 years of age. Using stimulus-based interviewing, participants were asked to select between three to five of their own social media posts prior to meeting. These images were then shared during the interview to stimulate discussion. A total of 21 interviews were conducted – the family interviews lasted on average just under an hour and the individual interviews about 15-20 minutes.

Data collection has recently been completed, along with some initial analyses. The research group observed, as reported in the existing literature, parents were often unaware of their children’s access to and expertise in the use of social media. Interestingly, this seemed to be the result of different understandings of what constituted social media engagement. Also, as expected, it was noted that different platforms served different purposes and were experienced differently.

The interviews themselves tended to circulate around the concept of permission and how it relates to their existing relationships and their position with the family. ‘Permission’ became a contested territory which reflected the existence or absence of trust. In this sense, the online and offline relationships were tightly interwoven. In those families with, what appeared to be, a strong, trusting relationship this came out in the young people’s views of their parent’s social media use. Negotiating permission was also highly contextual. In most cases the point at which permission needed to be sought was vague, although it was related to the young person’s age. Also, because young people are often reinventing themselves, this sometimes coincided with transitional points in their lives (e.g. move to secondary school, becoming a teenager, etc.).

Embarrassing photos that had been taken in childhood were in most cases deemed to be acceptable, but the more recent the photos became the less comfortable the young people felt about them. This disassociation of past social media selves, who they were as a child rather than who they want to be as a young adult, potentially reflects their developing sense of agency in the curation of their online presence. There are plans to explore this further in relation to existing work around the production of digital authenticity (Lazard & Capdevila, 2021).

Parents often started to seek permission when their child joined social media. Going forward, the group would like to explore the ‘geographical’ elements of this process in our data.  For instance, how (cyber)space, initially a parental space, becomes territorialised in particular ways by their children as they enter and become agents within that space.

This full analysis of the data from this proof-of-concept study will contribute to ongoing research as well as an upcoming funding bid.