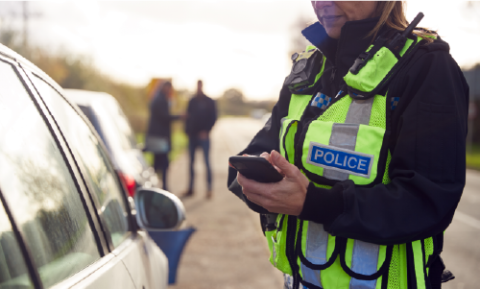 The Open University, in collaboration with Staffordshire and Keele Universities, has been awarded £24k from the Road Safety Trust for research on the policing of distracted driving, and officer understanding of the dangers of handsfree mobile phone use behind the wheel. Building on work completed by the Mobile: Engaged project, this new research aims to go further, and understand police officer interactions with mobile phone offenders, to challenge the perception of handsfree phone use being the ‘safe’ alternative.

Handsfree phone use remains legal, despite a wealth of evidence that it is a significant, risky distraction to drivers. The Open University’s Prof. Gemma Briggs, who is leading the research, commented on the current laws around mobile phone use behind the wheel:

‘Even with recent updates, current mobile phone law is outdated and not fit for purpose. The law, by implication, suggests that handsfree phone use is a safe alternative to handheld use, despite compelling research evidence, including OU research, which disputes this.

The Government acknowledges the dangers of handsfree phone use yet is reluctant to change legislation, due to enforcement challenges. In the absence of appropriate legislation, alternative approaches are needed, including educating police officers to ensure that when they stop drivers for using handheld phones, they do not endorse handsfree use as a ‘safe and legal’ alternative.’

How the project will work

This project will pilot and evaluate an existing educational interactive activity on driver distraction, made by researchers at the OU, to determine its effectiveness in communicating research findings. This evidence-based, gamified activity has been identified as having potential to overcome a significant issue with educational interventions in this area, as Briggs explains:

‘Drivers consistently overestimate their own multitasking and driving ability, whilst believing that other drivers lack such ability and therefore pose a danger to others. The interactive Open Learn activity, which asks ‘are you a focused driver? directly challenges drivers’ inflated confidence by getting them to focus on a phone conversation at the same time as a looking for hazards in a driving video.

Rather than simply telling drivers that phone use impairs their performance, they experience it for themselves. It is hoped that this approach can be used to educate police officers, who will then in turn share what they know with the public.’

The team of academics will work closely with policing partners from West Mercia and West Midlands Police forces. They will survey officers on their experiences of interacting with handheld phone offenders and measure their knowledge and awareness of research findings on the dangers of handsfree phone use, which has shown to be inconsistent.

The roadside interaction between offender and officer is an important opportunity to promote safety over legality and avoid drivers moving to a legal – yet equally distracting – form of phone use. It is hoped that this project can meaningfully inform police interactions with offenders, with a view to improving road safety for everyone.

The research team will be sharing their findings, on completion of the project, via the OU Driving Change website. If you would like to learn more about the research in this area, take a look at the Mobile:Engaged compendium

Are you a forced driver?(OpenLearn course)

Are you driven to distraction?(OpenLearn course)

We need to talk about handsfree project summary, The Road Safety Trust