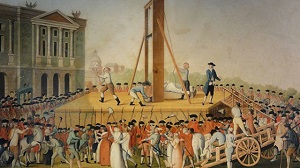 This lectures explores contemporary reactions to the democratic experiment of the French Revolution. For many in France as in Britain, France’s descent into violence illustrated the dangers of democratic and rights-based politics. But for those who continued to uphold democratic ideals in the late eighteenth and early nineteenth centuries, the Revolution’s failure also provided a set of lessons to reflect upon.

‘For many people looking on, France’s descent into violence illustrated the dangers of democratic and populist politics.’ Anna Plassart is a lecturer in History at the Open University. Her research focuses on political ideas in the late eighteenth century, and she is particularly interested in Scottish and English views of the French Revolution.