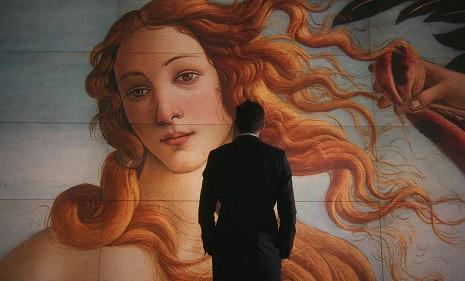 On 2 March, a new four-part OU/BBC series ‘Age of the Image’ starts on BBC Four at 9pm.

In a major new series, art historian James Fox explores how the power of images has transformed the modern world.

Episode one: Mon 2 March, 21:00, James explores how the power of images has transformed the modern world. Starting at the beginning of the 20th century, when an explosion of scientific and technological advances created radical new ways of looking at the world.

From the impact of aerial photography on modern art to our ability to peer inside the body and freeze time itself, it’s a dizzying journey of visual invention, making fascinating connections between the work of artists, filmmakers, photographers and scientists.

Episode two: Mon 9 March, 21:00, James Fox explores how mass communication and new technology helped twentieth-century image-makers transform society, as films, photographs, TV, art and advertising all became weapons in the ideological battles of the age. He tells the story of Marlene Dietrich and Leni Riefenstahl, whom each used cinema to pursue very different visions of power and freedom.

We discover how Jewish comic book artists in New York created superheroes as their act of resistance to the Nazi threat. And why a Muhammad Ali magazine cover is one of the most powerful political images of the last century. In the UK, he reveals how Picture Post photographers and directors such as Ken Loach empowered the lives of ordinary people through a new style of filmmaking and reportage. Travelling from the Normandy beaches where Robert Capa took his famous D-Day photographs to the NASA control room which first witnessed live images from the Moon landings, it’s an exhilarating look at how image makers discovered the power to influence and change our lives.

Episode three: Mon 16 March, 21:00, programme information will be available on OpenLearn when released.

Episode four: Mon 23 March, 21:00, programme information will be available on OpenLearn when released.

The series was commissioned for the university by Broadcast and Partnerships. The OU Nominated Academics are Prof. Marie Gillespie (FASS), Dr Susie West (FASS) and Dr Patrick Wong (STEM) and the Media Fellows are Dr Joanna Paul (FASS) and Dr Claire Kotecki (STEM).

Visit OpenLearn, the OU’s free learning website, to explore the technology behind ‘deep fake’ image manipulation, and discover the cultural significance of the lens throughout history (note - this site may not be live before broadcast)