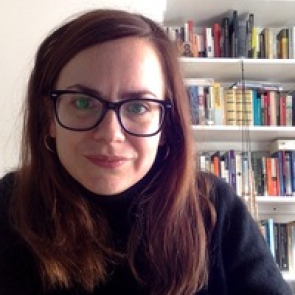 Amy's research is focussed on lens-based media in the twentieth and twenty-first century, including photography, film, video art and the the histories these mediums share with art and visual culture. She is particularly interested in moving-image installation and documentary histories. Her current research is focussed on the film and video essay, documentary and post colonialism; and gender and technology in moving-image and new media work of the 1980s and 1990s (focussed, in particular, in the US cities of Chicago and Los Angeles). Amy has presented her research at the annual confernece organised by the journal Historical Materialism; the annual Association for Art History conference; Royal College of Art, London; and the Centre for Contemporary Art, Glasgow. Amy's research is often produced with and augmented by her close work with artists and curators, this in turn involves her curating exhibitions, commissioning new work, screenings and public events (some of which can be viewed via the Working Images link on this page).

A Charlesworth, 'Absence and Saturation in Chantal Akerman's De l'autre côté (From the Other Side)'  The Oxford Art Journal, 40/2, Spring 2017

A Charlesworth, 'From Representation to the Biopolitical? A Review of Gender, artWork and the global imperative: A materialist feminist critique by Angela Dimitrakaki, Historical Materialism, 25(4), 2017

A Charlesworth, 'Caught between the factory and the home: re-visiting feminist ‘documentary’ aesthetics under globalized capital', Third Text Volume 29, Issue 1-2, 2015

'Once more, or always? some reflections on women and work in film and video of the 1970s and 1980s', SITUATIONS, Fotomuseum, Winterhur, 2016

'On Reporting, the Documentary and the Aesthetic in Ursula Biemann and Angela Sanders’ Europlex’, Ibrazz: contemporary visual culture in North Africa and the Middle East, 2013

'All the Word's Futures: Looking back at the Venice Biennial', Red Pepper, Jan 2016

'Situating the Essay in the “Documentary” Turn of Artist’s Film and Video’, The Essay, Royal College of Art, May 2014

‘Between the Factory and the Home: Re/production in the 21st Century and the Labour Question for Contemporary Art’, Annual 9th Historical Materialism conference, Birkbeck, London, November 2012

Amy is currently chair of our MA in Art History (A843 and A844). She is a contributing author to the third-year level A344 Art and its Global Histories and Subject Discipline Lead on our interdisciplinary level one module, A111 Discovering the Arts and Humanities. She has chaired  AA318 Art of the Twentieth Century. From 2016 - 2018 Amy was also part of the steering group for Open Arts Objects, short (open access) films with teaching support material dedicated to the objects of art history and the skills of visual analysis.

Since 2013 Amy has worked closely with the grass-roots national campaign group Justice 4 Domestic Workers (now The Voice of Domestic Workers) alongside partnerships with visual arts organisations, The Showroom (London) Pavilion (Leeds), artist Rehana Zaman and Leeds Animation Workshop (LAW). This collaboration emerged from Amy's interest in the politics of representation and the histories and relation between so-callled 'women's work' and the role of the camera in the Women's Movement in th UK. Contributions ranged from starting and co-running a branch in the north of England, comissioning and developing a film, workshops with the public, talks and screenings, fundraising and site maintanence for the organisation's website. Working within these partnerships has also enabled considered and continual renegotiation around the politics of collaboration and art pedagogy. In 2016 the commissioned film, They Call Us Maids: The Domestic Workers' Story was shortlisted for the AHRC Research in Film Awards.

From Representation to the Biopolitical? A Review of Gender, artWork and the global imperative: A materialist feminist critique by Angela Dimitrakaki (2017)
Charlesworth, Amy
Historical Materialism, 25(4) (201 -214)