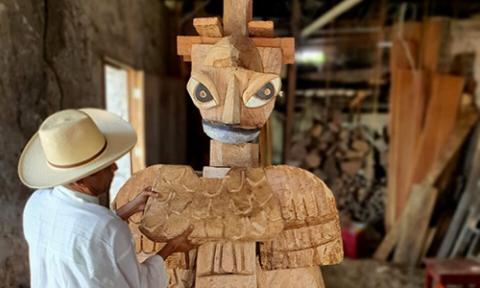 In preparation for the 26th UN Climate Change Conference of the Parties (COP26) in Glasgow this November, OU Professor of Religious Studies Graham Harvey has partnered with Border Crossings' ORIGINS Festival to promote the important message of TOTEM LATAMAT – a 4.5m tall totem from Mexico.

Due to current COVID-19 travel restrictions, this year there are limited opportunities for Indigenous people to participate in COP26, meaning the journey of TOTEM LATAMAT – carved from a single tree in Mexico and transported across the Atlantic Ocean – is hugely significant.

The totem, which has close links to Professor Harvey’s long-term research into animism, has travelled 9,000km to the UK, where it will be hosted by iconic locations across the country for people to visit. Starting on Thursday 30 September, it will begin a tour from London to Glasgow for the opening of COP26 on Monday 1 November.

Professor Harvey said: “TOTEM LATAMAT brings a message from Indigenous people to COP26 – and to everyone who encounters it – that celebrating and living responsibly among Earth's life is the best reason for urgent action in the face of climate change.

“The experience and resilience of Indigenous peoples and cultures is worth listening to. While comprising less than 5% of the world's population, Indigenous people protect 80% of global biodiversity.”

“My research focuses on the ways in which Indigenous people use traditional ceremonies and narratives to address urgent contemporary issues,” explains Graham. “Most pressing among these is climate change.

“Long-term celebration of human kinship with the larger-than-human community (sometimes called ‘nature’) is the foundation of the ceremonies and stories that encourage respectful relationships. I'm interested in cultural festivals, as well as political activism in which Indigenous people seek to convey a message of the need to respect life, rather than irresponsibly consume everything.”

Everyone is invited to visit the totem on its travels, where you can discover more about the artist and its intricate design.

Graham adds: “The maker of TOTEM LATAMAT, Jun Tiburcio, lives in a village and region which suffered major damage in a recent hurricane made more ferocious by climate change. The message of the totem is therefore not about a future threat, but about the present experience of anthropogenic climate disaster. This makes its message of ‘celebrate and live responsibly among all life’ eloquent and powerful.

“There are hummingbirds at the top of the totem because these small birds are understood to be messengers who make the point that each of us becomes responsible for acting on the news or facts we hear or witness.”

TOTEM LATAMAT will be on display at Chiswick House in London until Tuesday 5 October, where there will be a special opening ceremony with the Embassy of Mexico, before it begins its journey to Glasgow. After COP26, the totem will be transported to Dumfries where it will remain at The Crichton to disintegrate naturally.

Visit our event page for the full list of dates and locations you can visit the totem on its journey. Discover more about the totem on the ORIGINS website.