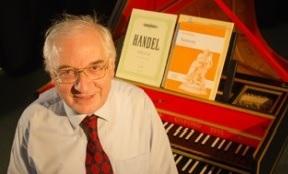 Emeritus Professor of Music Donald Burrows has been honoured by the publication of a festschrift by those he has inspired throughout his career.

A festschrift is a celebratory collection of writing in honour of an esteemed colleague presented during their lifetime. Edited by his former PhD student David Vickers (Royal Northern College of Music), New Perspectives on Handel's Music Essays in Honour of Donald Burrows represents the continuous yet evolving culture of Handelian studies in its current state by several generations of scholars across the world who are inspired by the research, publications and teaching of Donald Burrows.

Professor Burrows was “pleased to have been able to contribute towards the knowledge about Handel”, noting that the festschrift is not just a commemorative publication – “its contents are very worthwhile and well worth reading. The book represents the congeniality of a community of international people.” His own work would not have been possible without the friendship and support of staff at the OU, and the flexibility which the University provides. As well as his world-renown research, Professor Burrows has been Head of Music, and has contributed to the development and presentation of the curriculum over many years, including teaching at 56 Summer Schools.