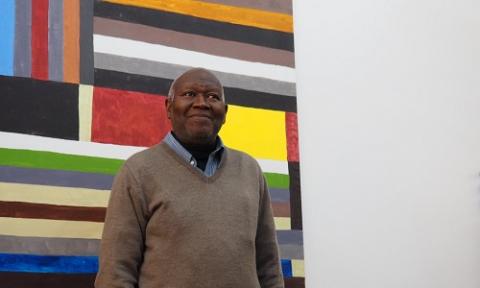 It is with great sadness that we have received and now share the news of our former doctoral student, Atta Kwami, who passed away earlier this month. Dr Kwami received his doctorate in Art History at the Open University in 2007 for a thesis entitled Kumasi Painting, 1951-2007, which was subsequently published as a book. This was a pioneering accomplishment: an extensive history of art in Ghana in connection with the art colleges set up during the colonial period and in the context of developments throughout the decades following independence. Dr Kwami’s thesis and published work provide information on the curriculum of the colleges, along with a survey of the region’s major practitioners. The photographic record that it comprises has great importance and will become a lasting source of reference.

During Dr Kwami’s studies at the OU (under supervisor Professor Emerita Catherine King, with external supervisor at the School of Oriental and African Studies, Professor Emeritus John Picton) he was interviewed in his studio in Kumasi, Ghana, for an OU/BBC television co-production. This brought a much-needed focus on the art of West Africa. It enabled the development of the Art History curriculum, moving it into a more global geography and intellectual territory through the participation of artists and experts practising in Africa.

This area of his interests, teaching and research, helped to secure Dr Kwami’s reputation as a serious scholar of art history. But he was better known and celebrated as a painter and sculptor, printmaker and curator. Dr Kwami received wide acclaim for his language of abstraction, which he developed in relation to multiple histories of art from across the north Atlantic world and Africa. His work is in collections throughout the world and he received many awards residencies and distinguished fellowships here and abroad. Recent sculptures can be seen at the current Folkstone Triennial. He recently designed large stained-glass windows for the new Ghana National Cathedral in Accra, designed by Sir David Adjaye OBE. In 2021, Dr Kwami won the prestigious Maria Lassnig Prize, a project with the Serpentine Galleries in London. The prize comes with a public commission, to be presented next year at Serpentine, as well as the publication of a major monograph surveying his life, work and career.