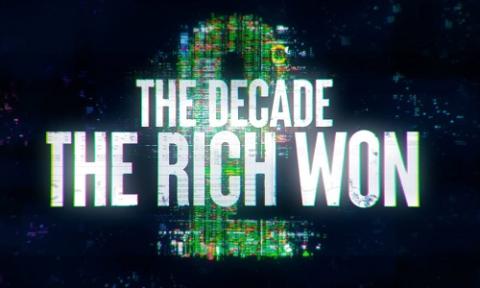 Broadcast on 25 January and 1 February at 21:00 on BBCTwo, two-part series The Decade the Rich Won talks to insiders about the 2008 financial crash and its far-reaching repercussions.

Key players opine on the crisis and the measures taken to solve it, including Mervyn King (Governor of the Bank of England), Alistair Darling (Chancellor of the Exchequer), and Steve Bannon (Whitehouse Chief of Staff).

The Bank of England and US Federal Reserve pumped billions into their economies through Quantitative Easing (QE).  However, financial insiders outline how the crisis created opportunities for the rich to vastly increase their fortunes, with only a small percentage of the money reaching those in need.

The series explores the worldwide protests and growing anger at inequality, charting how the Panama Papers leak revealed the extent of tax avoidance among the rich and powerful, and the reactions to economic shocks brought by Brexit and the Covid-19 pandemic.

Professor Susan Newman noted that “The overall impact of a decade of QE in the UK was to support GDP recovery in a way that has been heavily skewed in favour of the already wealthy by reproducing a low-productivity economic base predicated on low wages and precarious labour conditions.

“Things could have been different if policymakers a decade ago focused on raising investment to environmental and socially just economic activities such as a Green New Deal.

“Instead, policymakers have been forced to rely on QE to get us out of the pandemic-related economic malaise, something that is economically unsustainable and has the side effect of worsening inequality even more.”

Dr Jamie Woodcock said that “Society has become more unequal since 2008. As the documentary shows, the decade that followed was dominated by political choices that favoured the rich, while the rest of society lost. It’s also a reminder that other choices could, and still can be made about how to organise society differently.”

The series is accompanied by an illustrated guide to the Wealth Gap, created by the academic consultants with Scriberia.