OpenTALKS: Neil Younger ‘Making This Realm of England an Empire: The Tudors, Europe and The Reformation’ 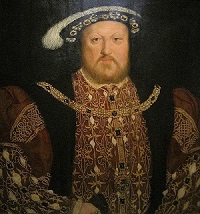 “Portrait of King Henry VIII., Blickling Hall, Norfolk” by Snapshooter46 is licenced under CC BY 2.0

The relationship between Britain and its European neighbours has often been a contentious one, with the sixteenth-century Reformation of religion forming a particularly disruptive episode. This talk will look at relations between Tudor England and Europe in terms of both process and impact, and will consider whether that era offers any lessons for remaking our relationship with Europe in the twenty-first century.

‘This talk will consider whether relations between Tudor England and Europe in the sixteenth century ca offer any lessons for remaking our relationship with Europe in the twenty-first.’ Neil Younger has been a Lecturer in Early Modern History at The Open University since 2014. His research focuses on the political history of the reign of Elizabeth I and he is currently completing a book on the courtier and politician Sir Christopher Hatton.