The History Department at The Open University is a community of internationally recognised researchers. We research the history of Britain, Europe, Africa, Asia and the Americas from 1500 to the immediate past. We have expertise in the history of crime and policing, ‘Empire’ and postcolonial studies; Britain and Ireland since the 18th century, early modern Britain and Europe, and twentieth century wars, conflicts and politics.

Engaging with the wider world

Open University historians engage and collaborate with learners and partners outside of academia. We reach large global audiences by publishing our research on our free learning platform, OpenLearn. Examples include ‘60 Years after the Treaty of Rome: Lessons from history for today's EU’; ‘The First World War continues: Britain’s dash for Mosul, Iraq, November 1918’; and ‘Methodism in Wales, 1730-1850’.

Our external collaborations extend to a range of partnerships, such as those with the Prisoners’ Education Trust; the Howard League for Penal Reform; and the National Justice Museum, via Dr Ros Crone’s successful AHRC bids on the history of prison education. Impact for these collaborations includes widening participation for current prisoners who can study a free OU module on this topic.

NGO Green Foundation collaborated with Dr Sandip Hazareesingh on an AHRC-funded oral history project focussing on the cultural memories of women farmers in India. Hazareesingh co-organised an international two-day workshop on Sustainable Farming Practices Past and Present in Bangalore, India, and shared the research with local farming communities in Karnataka, India. Hazareesingh and partner Green Foundation jointly presented their project ‘Changing Farming Lives in South India, Past and Present’ at a House of Commons conference (2019).

We have built a close working relationship with History & Policy, an umbrella organisation which connects historians with policymakers, leading to collaboration with the Home Office via a seminar series for Whitehall civil servants organised by Dr Chris Williams.

Dr Amanda Goodrich used her research on Henry Redhead Yorke to develop close links with History of Parliament Trust, resulting in a successful Collaborative Doctoral Award to research the history of BAME presence in British politics and a pilot project on the history of BAME members of parliament.

OU historians publish their research with national and international publishers and journals. Here are some examples of our recent publications: 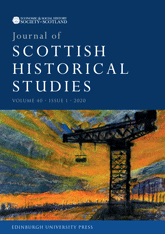 Dr Richard Marsden’s article 'In Defiance of Discipline: Antiquarianism, Archaeology and History in Late Nineteenth-Century Scotland' in the Journal of Scottish Historical Studies. The nineteenth century is often seen as the period in which old-fashioned antiquarianism gave way to modern archaeological science. This article uses the Scottish case study to question common assumptions about the decline of polymathic antiquarianism and the rise of specialist disciplinarity in the later part of the nineteenth century. 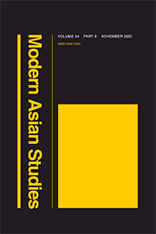 Dr Sandip Hazareesingh has published the Open Access article ‘Our Grandmother Used to Sing Whilst Weeding: Oral histories, millet food culture, and farming rituals among women smallholders in Ramanagara district, Karnataka‘ in Modern Asian Studies. This article demonstrates the significance of oral history in revealing the meanings of women smallholders’ millet-based foodways in southern India. It argues that women farmers’ cultural practices around food constitute fundamental ‘capabilities’ nurtured over a long historical duration and that they are essential to any meaningful articulation of ‘development’. Oral history emerges as a research method that is particularly conducive to reclaiming the voices and life experiences of subaltern groups such as women smallholders who are either not heard or are marginalized in written contemporary and historical documentary records. 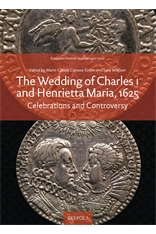 Dr Sara Wolfson has published a co-edited volume with Dr Marie-Claude Canova-Green on The Wedding of Charles I and Henrietta Maria, 1625: Celebrations and Controversy.
The union of 1625 between Charles Stuart, the Protestant King of Great Britain, and Henrietta Maria, a Catholic Bourbon princess, was a unique cross-confessional alliance in post-Reformation Europe. The volume brings together literary, art, music, and political-cultural scholars to explore for the first time the variety of celebrations that accompanied the match. In this volume, leading scholars from a variety of disciplines explore for the first time the marriage celebrations of 1625, with a view to uncovering the differences and misunderstandings beneath the outward celebration of union and concord. By taking into account the ceremonial, political, religious and international dimensions of the event, the collection paints a rounded portrait of a union that would become personally successful but complicated by the various tensions played out in the marriage celebrations and discussed here. 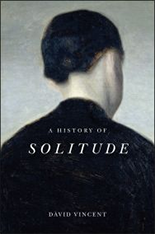 Professor David Vincent has published the book A History of Solitude, described in this Guardian review as ‘superb’. David Vincent explores how people have conducted themselves in the absence of company over the last three centuries. He explores the successive attempts of religious authorities and political institutions to manage solitude, taking readers from the monastery to the prisoner’s cell, and explains how western society’s increasing secularism, urbanisation and prosperity led to the development of new solitary pastimes at the same time as it made traditional forms of solitary communion, with God and with a pristine nature, impossible. At the dawn of the digital age, solitude has taken on new meanings, as physical isolation and intense sociability have become possible as never before. With the advent of a so-called loneliness epidemic, a proper historical understanding of the natural human desire to disengage from the world is more important than ever. A History of Solitude is the first full-length account of its subject. 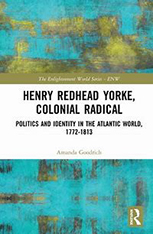 Dr Amanda Goodrich’s book on Henry Redhead Yorke was published by Routledge in 2019. This is a political, cultural and intellectual biography of the neglected but important figure, Henry Redhead Yorke. A West Indian of African/British descent, born into a slave society but educated in Georgian England, he developed a complex identity to which politics was key. The most revolutionary radical in Britain between 1793-5, Yorke then recanted his radicalism and died a loyalist gentleman. This book raises important issues about the impact of "outsider" politics in England and the complexities of politicization and identity construction in the Atlantic World. It restores a forgotten black writer to his due place in history.

You can view details of all our publications (and access many of them as open access publications) on Open Research Online. Our News & Events pages also gives more details on recent publications.

The OU’s partnership with the BBC is unique. We co-produce programmes for all BBC TV, radio, digital and online channels/platforms. OU historians are ‘nominated academics’ within BBC production teams and provide sustained input into the production process.

In the last few years, we have worked with the production teams for BBC programmes which attracted over 55 million viewers in total, including: Blitz: the Bombs that changed Britain; Full Steam Ahead; Britain’s Great War; Icons and Dangerous Borders. A Journey across India and Pakistan. A Journey across India and Pakistan. 2021 will see the broadcast of Empire: Hidden Histories.

We also create additional online content on OpenLearn to accompany BBC series. For example, Dr Sandip Hazareesingh’s three articles to accompany Dangerous Borders (2017); Professor Annika Mombauer’s materials on Germany’s experience of the Blitz to accompany and contextualise the BBC1 series Blitz (2019); and Dr Chris Williams’ ‘What have the Railways to do with the 999 system’ alongside Full Steam Ahead (2016).

Dr Ros Crone’s two AHRC grant successes have enabled her to create an exhaustive list of 19th-century prisons and their archives to track the extent and features of prison education. This resulted in the first comprehensive guide to 19th century prisons and their archives, published in two volumes and in a searchable, open-access, database on the Prison History website. This database contains details on 847 English local and convict prisons. Prior to this research, historians did not know how many local prisons existed and almost nothing was known about the education they provided. In 2019, Crone added a second database, ‘Local Lock-ups’, to the Prison History website, providing details of 926 structures used for the temporary confinement of accused criminals. By enabling the public to engage with the site and contribute additional information, this research has brought local history alive and created an online community.

Based in the Centre for the History of Crime, Policing and Justice at The Open University, Prison History is the result of Dr Ros Crone’s AHRC-funded research into the history of prison education. It transforms our understanding of incarceration in the British Isles from the early modern period to the twentieth century through the publication of new, interactive resources. Prison History hosts two datasets: 19th Century Prisons, a database of 846 English prisons that existed between 1800 and 1899; and Your Local Lock-Up, an evolving collection of sites used for temporary confinement between 1500 and 1999.

The BAME Presence in British Politics

This is a collaborative project between The Open University and History of Parliament Trust. Focusing on the period 1750-2020 and drawing on a wide range of sources, this project is led by Dr Amanda Goodrich and Dr Suzanne Forbes. It will produce the first database of Black and minority ethnic people involved in British politics and political culture more broadly.

There is today a move to restore Black and minority ethnic people to their rightful place in British history. Historical attention has primarily focused on the narrative of slavery and abolition, yet only a few Black and minority ethnic individuals involved in British political life, as members of parliament, candidates in constituency elections, and participants in local government or other political activities have been identified to date.

Drawing on a wide range of sources, the BAME Presence in British Politics Project aims to understand the many ways in which Black and minority ethnic people participated in British politics and political culture more broadly.

A pilot project is currently underway to assess the feasibility of developing the wider public-facing database that records the BAME presence in British history over three centuries. Text-mining and named entity recognition techniques will be used to explore the extensive and diverse range of relevant sources online in the first instance, to enable researchers to identify relevant BAME individuals.

Dr Luc-Andre Brunet’s current project The Global Peace Research Network (GPRN) will provide a global perspective of the study of anti-nuclear and peace activism, particularly against nuclear weapons, since 1945, thereby ‘de-centring’ a field that remains focused on Western Europe and North America. Partnering with nine universities and NGOs in Brazil, Japan, South Africa, Sweden, Switzerland, the UK and the United States, this interdisciplinary network is organising a series of workshops and events. Among the outputs is a public-facing, freely accessible Digital Peace Archive (DPA) to engage, educate and provide resources for teachers and their students, activists, and researchers.

Dr Sandip Hazareesingh’s most recent research focuses on the neglected historical, cultural, and consumption dimensions of millet foods in rural southern India with a view to identifying heritages, knowledges, and practices conducive to the revival of the desire to eat these foods. An important part of the research will involve oral history interviews with women farmers and will be jointly conducted with project partners Amrita Bhoomi and Green Foundation. The project will also organise food festivals to celebrate millet and other local foods. A related event will be an exhibition on 'Millets and traditional foods in the age of the Anthropocene' at the Bangalore Science Gallery which will include participatory installations by artists and scientists to enable experiments with food and nutrition in the context of current climatic challenges.

You can find out more about what is going on in the History Department by following us on Twitter. Latest news relating to our research can also be found on our News and Events blog.