Can't join in person? Watch the event live on Stadium or live on Facebook.
(* link will be live just before the event.) 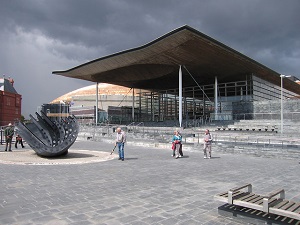 “Y Senedd” by Rudi Winter is licenced under CC BY 2.0

The twenty-first century has witnessed unprecedented internal challenges to the very existence of the British state. Devolution was originally intended as a means of pulling the teeth of nationalism in Northern Ireland, Scotland and Wales. But that plan has backfired spectacularly. These are of course contemporary events, but they are driven by long-term historical changes and, more specifically, developments in how the constituent nations of the UK mythologise their own pasts and their historical relationships with one another and with Europe.

‘Devolution was originally intended as a means of pulling the teeth of nationalism in Northern Ireland, Scotland and Wales. But that plan has backfired spectacularly.’

This lecture is held in partnership with Cardiff University’s Wales Governance Centre and is part of the OU’s History lecture series. Our OpenTalk lecture series in Wales is fully funded by the Higher Education Funding Council for Wales (HEFCW). Richard Marsden a lecturer in History at The Open University, and he is interested in what you might call the ideological uses of the past. George Orwell once wrote: ‘he who controls the present, controls the past’. That’s putting it a bit strongly, but it is undoubtedly the case that people’s thoughts and actions in the present are shaped in part by how they think about the histories of their own communities and nations.