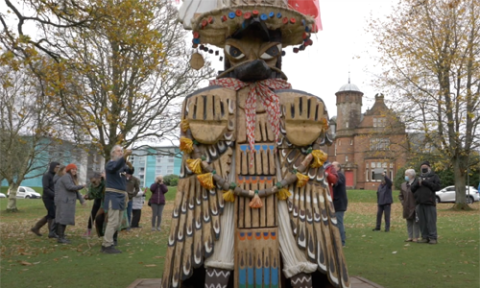 Following a month-long tour of the country which concluded at the 26th UN Climate Change Conference of the Parties (COP26) in Glasgow last month, TOTEM LATAMAT – a 4.5m tall totem from Mexico – has been laid to rest.

Commissioned by Border Crossings' ORIGINS Festival with support from OU Professor of Religious Studies Graham Harvey, the totem travelled 9,000km from Mexico to the UK to bring an important message about climate change from Indigenous communities.

The totem, which has close links to Professor Harvey’s long-term research into animism, was hosted by iconic locations across the country for people to visit.

“My research focuses on the ways in which Indigenous people use traditional ceremonies and narratives to address urgent contemporary issues,” Professor Harvey explained.

“Most pressing among these is climate change. The experience and resilience of Indigenous peoples and cultures is worth listening to. While comprising less than 5% of the world's population, Indigenous people protect 80% of global biodiversity.”

En route to Scotland, the totem was welcomed at a remarkable range of events involving local communities and national media, bringing its presentation of kinship, respectful relationships, the necessity of urgent action, and celebration of life to locations such as The Rollright Stones and Hexham Abbey, before the crucial COP26 event, which took place from 31 October to 12 November 2021.

Having conveyed its vital message, it has now retired. At the end of November, TOTEM LATAMAT arrived at its final destination – The Crichton in Dumfries, Scotland. In a special ceremony, its journey was celebrated, the message acknowledged, and the invitation to carry the message further was accepted.

Professor Harvey continued: “TOTEM LATAMAT was dramatically pulled over to lie on – and partly in – the ground. Rather than becoming a monument or museum piece, the totem will decay gracefully.”

This was always part of the plan – and you can discover why in Professor Harvey’s blog on the Religious Studies page, as well as learn more about how the totem’s journey first started.